National Records of Scotland (NRS) holds a variety of records relating to burghs. The earliest burghs date from the reign of David I (1124-53). He introduced feudal tenure into Scotland and encouraged the growth of towns as a means of fostering trade and increasing crown revenues. The burgh's privileges and obligations, including trading privileges and the right to hold markets, were enshrined in a charter granted by the king or other feudal superior. In return for their privileges, royal burghs made annual payments to the crown of the rents of burgh properties and the customs of trade. Later this became a fixed annual sum. Any surplus money was paid into the 'common good fund' for the benefit of the burgh. 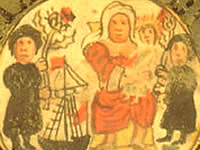 At first the burghs were governed through the burgh courts, originally a gathering of 'all the good men of the community'. Gradually the burgh court meeting in a judicial capacity came to consist of the bailies only, while the town council (provost, bailies and councillors) attended to the administrative business. The merchants dominated the magistracy of the towns as the royal charters of trading privileges were in effect charters to merchants as they brought in the largest part of the burgh revenues, the burgh customs.

Different types of burghs exhibited a wide variety of systems of government, until 19th century legislation imposed uniformity. The 1833 Burgh Reform Act also swept away the corruption of self-perpetuating town councils by introducing proper elections for town councillors. Royal burghs still retained certain privileges, including their own registers of sasines, but in the 20th century all except the largest lost some powers and functions, mostly to the county councils.

The burgh records can be consulted in the Historical Search Room at General Register House. When using the records you should bear in mind that the burgh boundaries have changed over time. Check the report of 1832 on Parliamentary Representation in Scotland available in the Historical Search Room. It gives the proposed constituency boundaries and contains maps and reports on the appearance, condition and population.

The records of each burgh are not always similar, either in form or quantity, as unfortunately not all of the main series of records survive for each burgh. No burgh archive, except for Aberdeen whose records are held by the Aberdeen City Archives, has a significant series of records pre-1500. Many burgh records, apart from the burgh registers which were deposited in the NRS under the terms of the Burgh Registers (Scotland) Act have been transferred to local archives.

Including royal charters. Some are very early, for example, Cupar begins in 1364 (NRS reference B13/21).

Mostly relating to debt, tacks of property and indentures of apprenticeship, charter parties and other contracts.

Burgh registers were instituted by an act of 1681. Only royal burghs had the registers and the register related to lands within the original burgh boundaries. The Burgh Registers (Scotland) Act of 1926 arranged for their gradual demise.

The medieval burgh court had both administrative and judicial functions. Eventually administrative acts were kept separately in the council minutes. The books include burgh statutes and ordinances, admission of burgesses, small debt, removal of tenants, assault, breach of the peace, inquests recognising someone as heir to a deceased person and offences against trade such as forestalling. The burgh also dealt with the moral and social good behaviour of their inhabitants. Cases were passed from the kirk sessions to the burgh courts - for example adultery, fornication, irregular marriage, witchcraft.

The day to day running of the burgh and the regulation of the lives of its inhabitants and the burgh's involvement in local and national affairs. Acts of the council, elections of councillors, bailies and other council officers, lists of inhabitants paying stent (tax), burgh schools, trade disputes, offenders against burgh regulations. Generally before 1600 the council minutes appear mixed in with court business in the court books.

The Dean of Guild Court in many burghs became the first effective form of building control and continued to regulate building standards until 1975. Dean of Guild court records for most burghs passed to local authorities in 1975 but some are held by the NRS:

A list of surviving records for Dean of Guild courts for each burgh is given in:

Burgh income and expenditure. Money derived from the burgh's lands and fishings became known as the 'common good' and was intended to be used for common purposes, such as the repair of the town clock. The books can be a source of information on specialist topics such as the cost of a harbour or other public works.

Applications for licences for sale of ale and other liquors for inns or shops.

Burgesses were originally any inhabitant of a burgh who held land there. It was later restricted to merchants and craftsmen. Burgess tickets were also granted to outsiders who had performed some service for the burgh. In addition to the burgess rolls and court books recording the admission of burgesses in the burgh records, there is a separate series of burgess tickets in NRS reference RH10. The Scottish Record Society has published indexed or alphabetical lists of burgesses for Edinburgh, Canongate, Glasgow and Dumbarton.

A number of registers of voters survive for burghs from the time when the burghs were in separate constituencies from the counties:

Information on the commissioners representing the burghs in the Scottish Parliament is given in 'The Parliaments of Scotland: Burgh and shire commissioners', edited by Margaret Young (Edinburgh, 1992)

Plans for burghs can be found in the Register House Plans series. Read our guide to maps and plans for more information.

Other sources of information on burghs are: Scottish parliament records (PA), privy council records (PC), exchequer records (E) and private papers (GD). A small series of miscellaneous material relating to burghs is in NRS reference RH9/11. For information on new towns built after the war of 1939-45, look at the records of the Scottish Office Industry Department (NRS reference SEP).

G S Pryde, 'The burghs of Scotland' (Oxford University Press, 1965) lists royal burghs and burghs of barony and regality with a brief history including the charters of their erection from the Register of the Great Seal.

W M Mackenzie, 'The Scottish burghs' (1949) Detailed surveys of Scottish towns are being undertaken by the University of Edinburgh's Centre for Scottish Urban History in the Department of Scottish History. Reports on Aberdeen, Coupar Angus, Cumnock, Melrose, Musselburgh and Dalkeith have already been published by Historic Scotland.

The Burgh Record Society has published extensively from the records of the burghs of Aberdeen, Dundee, Edinburgh, Glasgow, Lanark, Paisley, Peebles and Stirling.