The Battle of the Somme was a mass allied offensive of the First World War by the British and French armies against the Germans, conceived  by General Haig. The prelude to the attack was a week-long bombardment of the German lines, firing a million shells intended to destroy the German defences and allow the allied armies to move forward relatively unopposed. The bombardment failed and instead of a quick victory, the offensive continued for five months. The number of casualties was very high: by the end of the first day of battle 21,392 British soldiers were killed or missing, 35,493 were wounded and 585 had been taken prisoner.

To mark the 100th anniversary of the Battle of the Somme, we have chosen to feature the stories of two of the thousands of Scots soldiers who perished on 1 July 1916, the first day of the battle. At the end you will find links to other features about men involved in the battle.

Privates Hew Edwards Browne and James Lundie both died on 1 July 1916. They were two of 18 officers and 610 soldiers of 15th Battalion, The Royal Scots, who were killed, wounded or missing by the evening of the 3 July. The 15th had been instructed to advance to a strong point about two kilometres south-east of La Boiselle. As they went ‘over the top’ at 7.30 am, it instantly became clear that the preliminary bombardment had failed and the soldiers were met with artillery and machine-gun fire. A few survivors somehow managed to reach the German trenches. 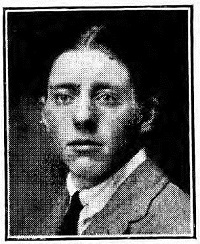 Hew, born in Roslin, Midlothian in 1895, was the youngest of the three sons of George Washington Browne RSA, architect, and Jessie Brownlie. When Hew left George Heriot’s School, he became a pupil photographer before  joining up with the 1st City of Edinburgh (Pals) battalion, designated the 15th Battalion, of the Royal Scots in 1914. Pals battalions, which were made up of volunteers from the same locality or business, were introduced to encourage young men to join up with their friends. The 15th Battalion was also known as Cranston’s, named for a former Lord Provost of Edinburgh. It was raised in Edinburgh in September 1914, attracting volunteers from Edinburgh itself and with a strong contingent from Manchester, and arrived in France in January 1916. The Somme was one of the first engagements of the Great War where the Pals battalions, the backbone of Kitchener’s New Army, were tested, the ‘new amateur armies … raised, trained, and equipped in less than two years, with nothing in the way of military tradition to uphold them – nothing but the steady courage of their race…’ as they were described by Ian Hay in ‘Carrying on after the First Hundred Thousand’ (1917). 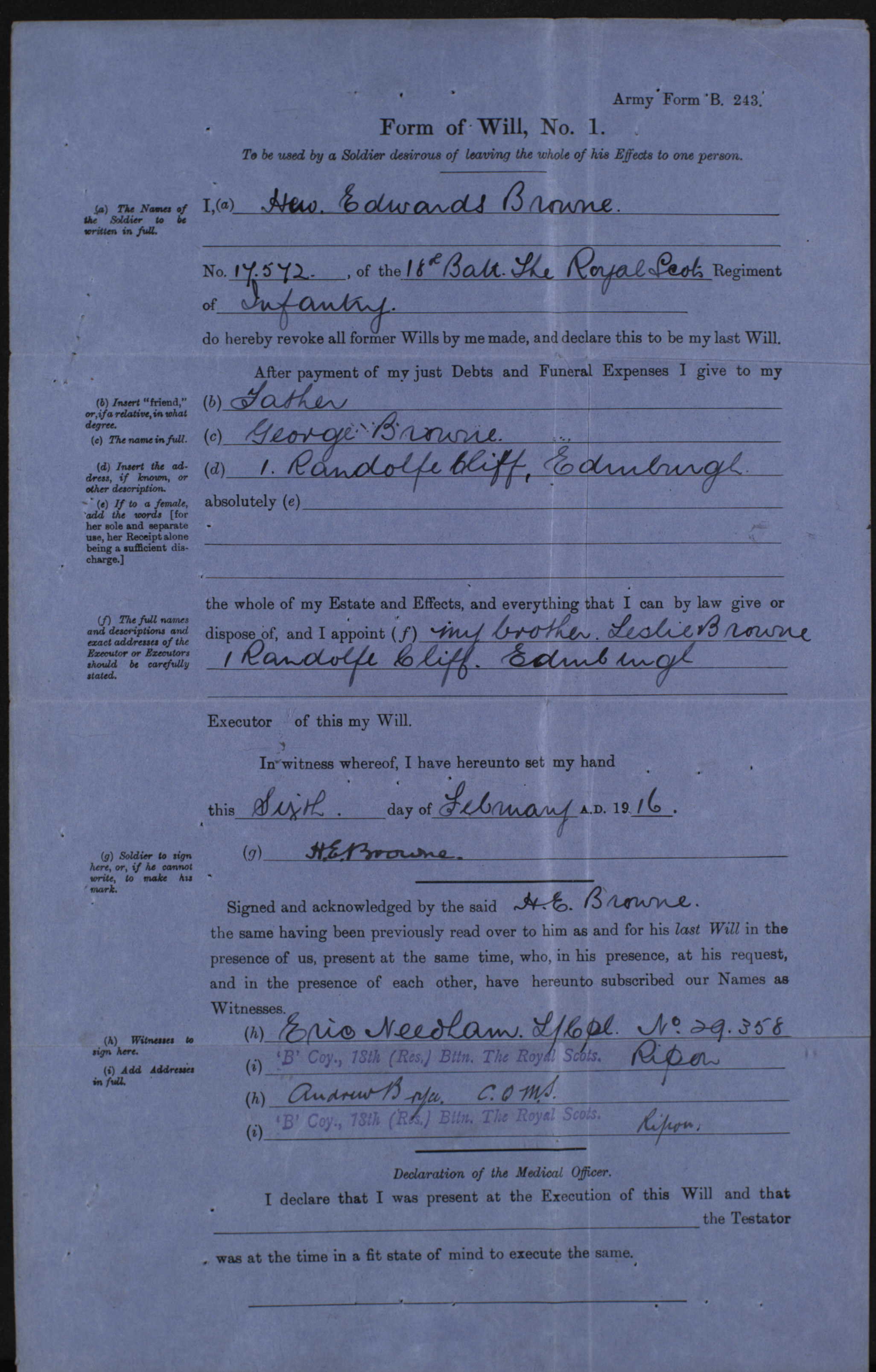 While at Ripon before embarking for France in February 1916, Hew had completed Army Form B.243, leaving all his possessions to his father and appointing his eldest brother, Leslie, his executor.

Hew’s mother, Jessie, had died from appendicitis in 1900 at just 42 years. The 1901 census lists George Washington Browne as a widower with a young family still at school. All three of his sons were of an age to fight in the Great War.  George’s second son, George Brownlie Browne, 2nd Lieutenant with the 9th Battalion of the Black Watch, was killed in action near Loos on the 7 February 1916. 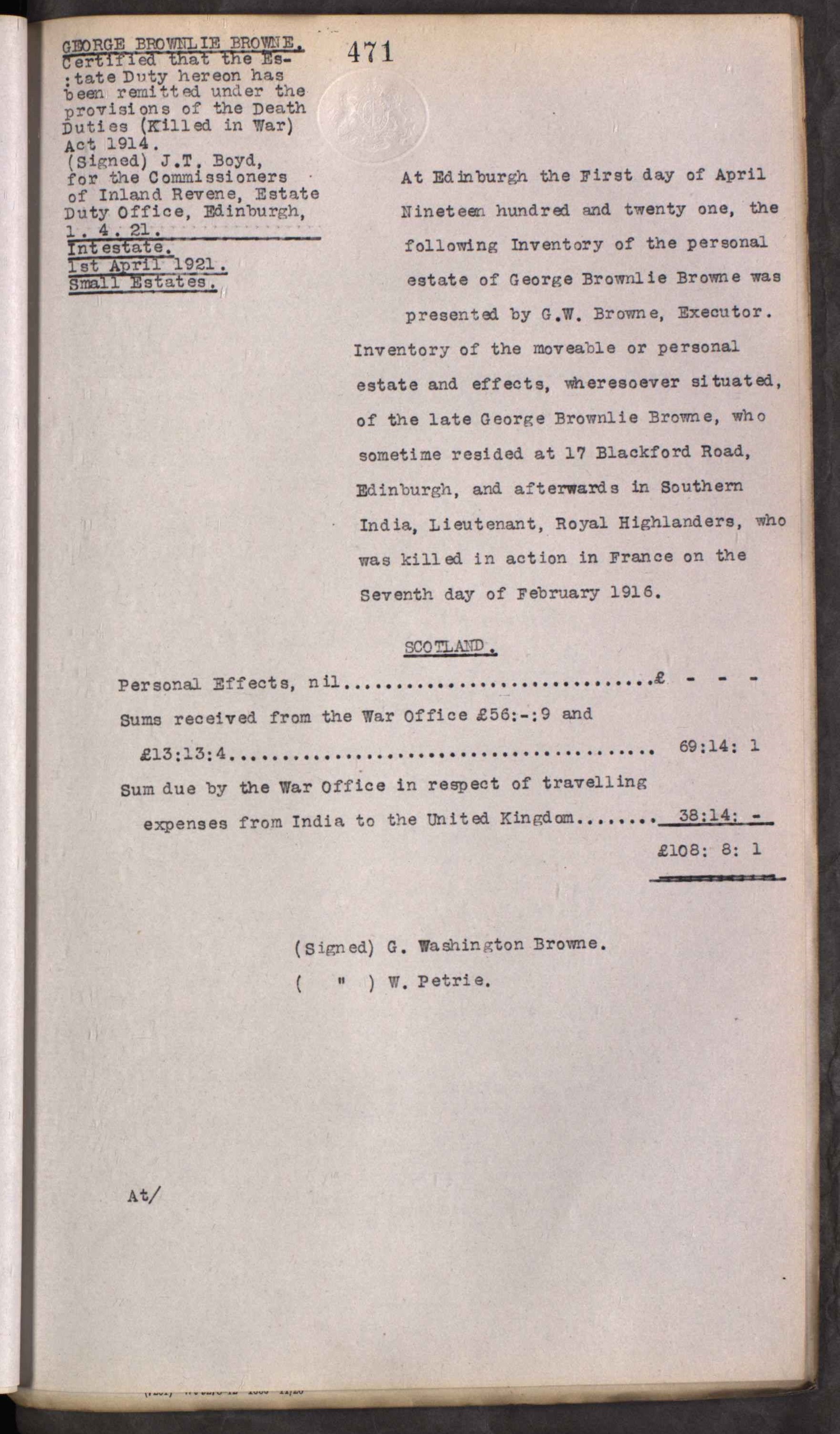 George died intestate. Because he had not left a will, a testament dative was granted by the Sheriff Court to his father in 1921, after an unusually long delay. This mainly consists of an inventory which shows that at his death, George’s personal estate amounted to £108 8s, including £38 14s paid by the War Office to cover the expense of his return from Southern India in 1915 so that he could volunteer to fight. The testament confirms that  George ‘died unmarried and without issue, but survived by one brother and one sister german’.

Leslie Aitchison Browne, George’s eldest son and Hew’s nominated executor, was wounded at Ypres. He survived the war, but never fully recovered from his injuries and died from tuberculosis in 1922. George Washington Browne went on to design seven war memorials between 1919 and 1921. He was knighted in 1926, admitted as a Fellow of the Royal Institute of British Architects and was president of the Royal Scottish Academy from 1924 to 1933. The family plot is in Grange Cemetery, Edinburgh – although Hew’s body was never found and George B Browne is buried in Vermelles British Cemetery.

James Lundie and his brother, John,  both joined The Royal Scots on 20 May 1915. The 1911 census shows them living in Leith with their mother, sister and younger brother - their father, Andrew Lundie, a labourer, had been killed in an industrial accident in 1905.

James, initially a factory worker, became a car fitter working for the Leith Corporation Tramways, and younger brother John worked for the Crawford’s Biscuit Factory.  James was reported missing after the action on the Somme on 1 July 1916. His will, leaving all his property to his mother, was written in his Army pay book. John Lundie, fighting with the 13th Battalion, Royal Scots, nearby on the Somme , died soon after on 20 July 1916, from wounds received. Thankfully, the youngest son in the Lundie family, Alexander, was too young to fight in the war. 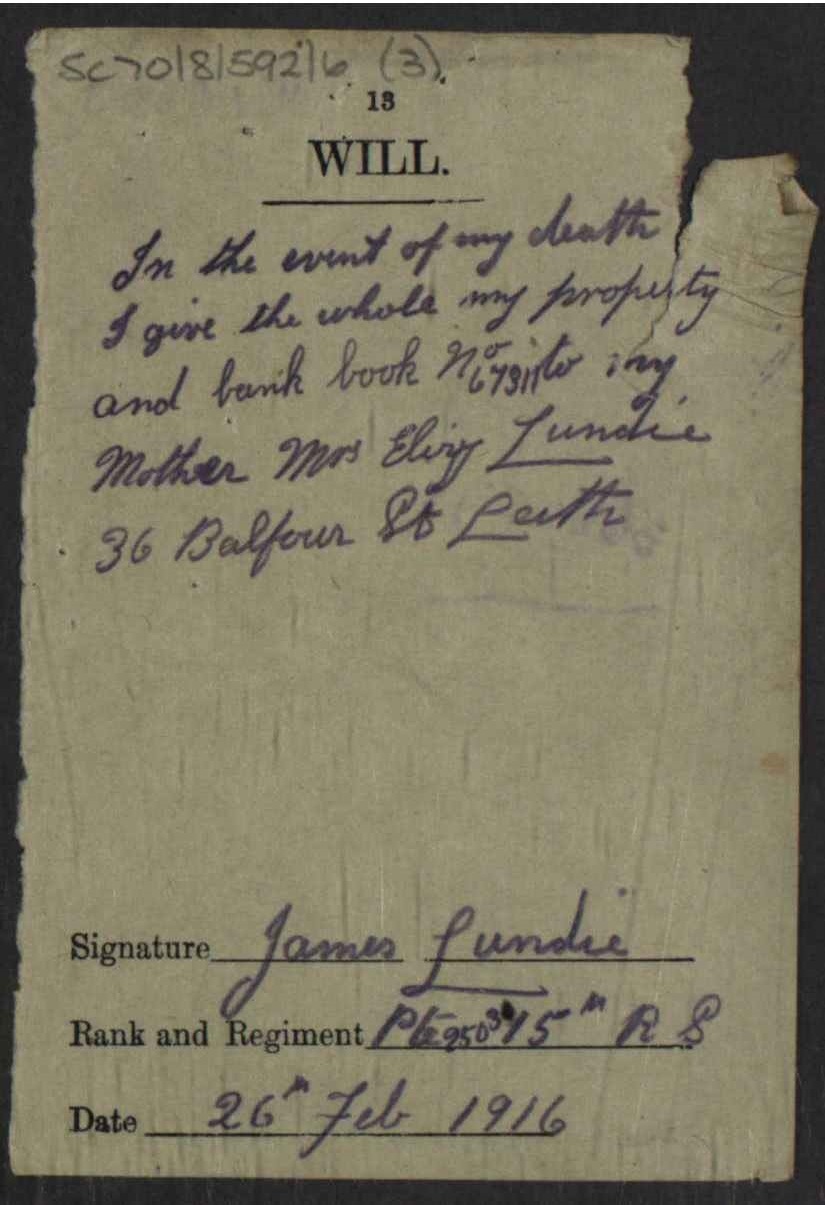 Of the 610 soldiers from the 15th Battalion killed on 1 July 1916, the NRS holds wills written by 57 men in their pay books or on army forms. They are just a handful of more than 25,000 ordinary soldiers from the First World War represented in the soldiers’ wills series which can be researched via ScotlandsPeople. Many more wills of soldiers can be found in the main series of Wills and Testaments on ScotlandsPeople.

Privates Hew Browne and James Lundie, like many of those who fell at the Somme, have no known grave and are commemorated on the Thiepval memorial. George Brownlie Browne and John Lundie are buried in Vermelles British Cemetery.