This report gives statistics on the 2014 Electoral Register which came into effect on 10 March 2014. Normally, the reference date (for previous publications) is 1st December, but this date was temporarily changed in the light of the work to move to a system of Individual Electoral Registration (further information available on the Electoral Commission website) as well as the Independence Referendum in September.

The tables provide data on the people who are registered to vote in the UK Parliament (59 constituencies), Scottish Parliament (73 constituencies and 8 regions), for Local Government (32 council areas and 353 electoral wards), for the European Parliament as well as information on the number of ‘Young Voters’ for the Scottish Independence Referendum (by constituency and Council area).

In 2014, there is a European Parliamentary election on the 22 May and the Independence Referendum on the 18 September. 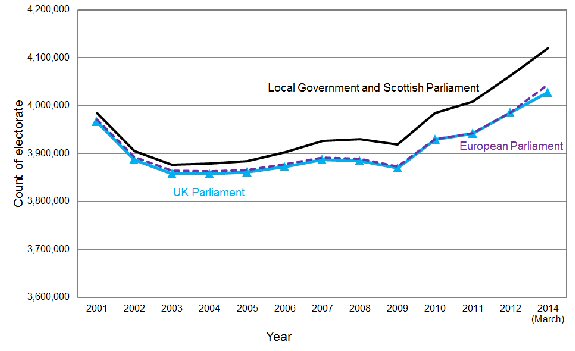 Table 2 shows that on 10 March 2014, the largest UK Parliamentary constituency in Scotland was Linlithgow and East Falkirk with 84,453 people registered to vote and the smallest was Na h-Eileanan an Iar with 22,084 people. Also the constituency with the smallest electorate on mainland Scotland is Caithness, Sutherland and Ross (48,140 electors). The next UK General Election is due in 2015.

The average number of electors in the 73 Scottish Parliamentary constituencies rose by around 705 between December 2012 and March 2014 and the largest and smallest Constituencies were Linlithgow (69,665 electors) and the Orkney Islands (16,980 electors) respectively. The constituency with smallest electorate on mainland Scotland is Renfrewshire South with 48,593 (as shown in Table 4 and Table 5). The next Scottish Parliamentary election is in 2016.

Table 6 shows the electorates in the 353 wards in Scotland by council area. The average Electoral Ward in Scotland had 11,673 electors (and 182 attainers), although the numbers vary widely according to the number of councillors representing the ward, and other local considerations.

The electorate for the Independence Referendum on the 18 September 2014 is based on the same eligibility conditions as the Scottish Parliamentary electorate. In addition, those who are 16 and 17 years old on that date and who fulfil these conditions will be allowed to vote if they have registered to do so.

There is a great amount of interest in the Independence Referendum and it is likely that this will be reflected in the size of the electorate, not just because of the addition of 16 and 17 year olds, but also because of the higher levels of interest generated amongst the wider electorate. Figure 1 shows that the size of the Scottish electorate has been increasing over the past few years, and this is thought likely to continue between the reference date for the data referred to in this publication - 10 March - and the Referendum on 18 September.

The number of Attainers has increased by 37.6 per cent in the last year or so. This is likely to be result of efforts to recruit Young Voters for the Independence Referendum. Electoral Registration Officers have been working hard to ensure that as many 16 and 17 year olds as possible are registered to vote.

The counts of Young Voters as at 10 March are shown in Tables 7 and 8. The information in Tables 7 and 8 also indicates that just over 80% of the estimated number of 16 and 17 year olds in the population have already been registered to vote on the 18 September (as of 10 March 2014). These numbers will likely increase over the next few months as efforts to add 16 and 17 year olds continue.

Note that 'Young Voters' are not shown in Figure 1.