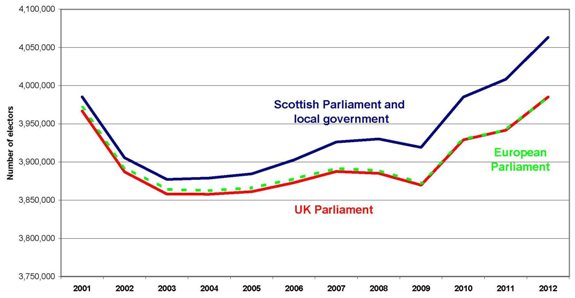 Table 2 shows that on 1st December 2012, the largest UK Parliamentary constituency in Scotland was Linlithgow and East Falkirk with 82,818 people registered to vote and the smallest was Na h-Eileanan an Iar with 22,064 people.

The average number of electors in the 73 Scottish Parliamentary constituencies rose by around 750 between December 2011 and December 2012 and the largest and smallest constituencies were Linlithgow (68,222 electors) and Orkney Islands (16,950 electors) respectively. (Table 4 and Table 5).

Table 6 shows the electorates in the 353 wards in Scotland by Council area. The average Electoral Ward in Scotland had 11,510 electors (and 132 attainers), although the numbers vary widely according to the number of councillors representing the ward, and other local considerations. Local government elections were last held on 3 May 2012.

Note: the electorate for the Independence Referendum next year will be based on the Scottish Parliamentary electorate, with the addition of those who are registered and have reached the age of 16 on the day of the Referendum.