This report gives statistics on the 2016 Electoral Register which came into effect on 1 December 2015.  For the last two years the reference date was changed to 10 March 2014 and 2 March 2015 to facilitate the change to a system of Individual Electoral Registration, but this has now been changed back to 1st December. Further information available on the Electoral Commission website.

Figure 1 shows the patterns in Scottish electorates since 2001. There has recently been a drop in all the electorates. This is mainly due to the introduction of individual electoral registration (IER), which has affected the registration of students in particular. Prior to the introduction of IER, block registration was permitted particularly for student in halls of residence, but this practice has now been discontinued. IER has essentially made individuals responsible for their own registration, and many students have not yet taken this up. An additional factor in the past year has been the introduction of a lower voting age of 16 and above for local government and Scottish Parliament elections. Due to the timing of this change in legislation, and the timing of the canvass, this has only had a limited effect on the electorate thus far, but it is expected that this will be more fully taken up in 2016. 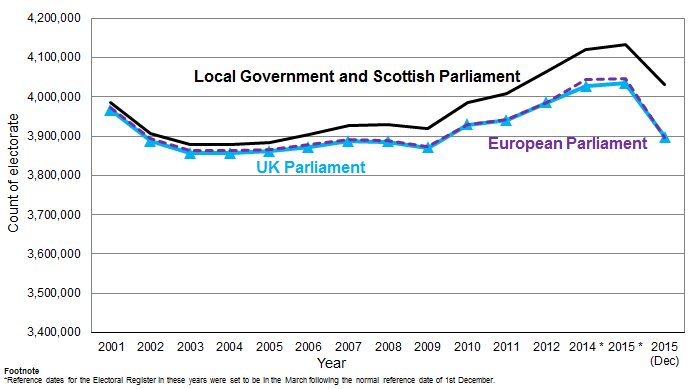 Table 2 shows that on 1 December 2015, the largest UK Parliamentary constituency in Scotland was Linlithgow and East Falkirk with 83,593 people registered to vote and the smallest was Na h-Eileanan an Iar with 20,887 people. The constituency with the smallest electorate on mainland Scotland was Caithness, Sutherland and Ross (45,898 electors).

The average number of electors in the 73 Scottish Parliamentary constituencies dropped by around 1,397 between March 2015 and December 2015. The largest and smallest constituencies were Linlithgow (69,980 electors) and the Orkney Islands (16,705 electors) respectively. The constituency with smallest electorate on mainland Scotland is Renfrewshire South with 48,120  (refer to Table 4 and Table 5). The next Scottish Parliamentary election is due on 5 May 2016.

Table 6 shows the electorates in the 353 wards in Scotland by council area. The average Electoral Ward in Scotland had 11,416 electors (and 60 attainers), although the numbers vary widely according to the number of councillors representing the ward, and other local considerations. Note that attainers this year are those who will reach the age of 16 during the currency of the Register while attainers in previous years were those who would reach the age of 18. The number of young voters (and attainers) is expected to increase in advance of the Scottish Parliamentary election in May 2016.