A.1 Introduction
A.2 Method used for 1998-based household projections
A.3 Changes from earlier methods used
A.4 Alternative methods tried

A.2 Method used for 1998-based household projections

The first main input to the projection of households is the 1998-based population projections for Scotland produced by the National Records of Scotland (NRS). These are produced for Scotland by local authority and age group using assumptions about births, deaths and migrations. Refer to the publication ‘Population Projections Scotland (1998 Based)’ for further information on the assumptions used. The relevant population for household formation is taken to be the adult population, aged 16 or over.

The second main input to the household projections is the historic information on the number of households, from the 1981 and 1991 population Censuses, for each combination of age group, household type and area within Scotland.

Household types were classified in terms of household composition, that is, the number of adults and children in a household (for example, one adult with two or more children). Relationships between persons in the household were not distinguished.

An example, for Dumfries and Galloway 1991 census data for persons aged 35 to 44 years old, is given below.

These proportions are known as the headship rates, since if we know the number of persons who head particular household types, this will be the same as the number of households.

We also know the residual number of persons who are in each area and age group but who are not the head of household. This allows both the ‘headship’ and ‘non-headship’ rates to be projected to avoid the theoretical possibility of negative ‘non-headship’ rates. This improvement was recommended from the research done by CHRUS, University of Glasgow, on viable alternatives for the method of projecting headship rates (refer to section A.3) and was also used in the 1994- and 1998-based projections. Previously, projected ‘non-headship’ rates were calculated as the residual for each group when projected headship rates were subtracted from 1.

These headship (and non-headship) rates were then projected forward using the modified two-point exponential model, the formula for which is as follows:

The projected headship (and non-headship) rates are constrained in two ways, firstly so that they cannot individually go above 1 or below 0, and secondly so that they sum to 1 within an area and household type.

A.3 Changes from earlier methods used

Prior to the production of the 1994-based household projections the, then, Scottish Office commissioned research from the Centre for Housing Research and Urban Studies (CHRUS) at the University of Glasgow to review the alternative methods for projecting household headship rates. They considered whether or not there were viable alternatives to the cross sectional, headship rate based approach used by The Scottish Office.

They concluded that although there was no alternative due to the absence of suitable information on which to base dynamic models which take into account transitions between different household types, there was scope for improvement within the existing approach. The following improvements recommended were incorporated in the 1994-based and subsequently also the 1996 and 1998-based household projections.

Firstly, as mentioned in section A.2.2, both headship and non-headship rates were projected to avoid the theoretical possibility of negative ‘non-headship’ rates. Other changes related to changes in the categories of household type, largely due to lack of census information on relationships within households. The decision was taken to only identify the numbers of adults and children within a household, so a ‘lone parent’ would not be identified as such, but would be included in the categories which have one adult with children. In addition, the sex of the head of household would be restricted to one person households. More detailed information on these changes can be found in the publication, ‘1996-based Household Projections for Scotland’ (HSG/1998/5).

The following alternative methods were tried for the 1998-based projections.

There were distinctly different trends in the numbers of households between 1971 and 1981, where the increase was relatively small, and between 1981 and 1991 when there was a sharper increase.

The minimum number of adults projected using this method could not be met by NRS 16+ population projections for a number of authorities, one authority for most of the projection period. 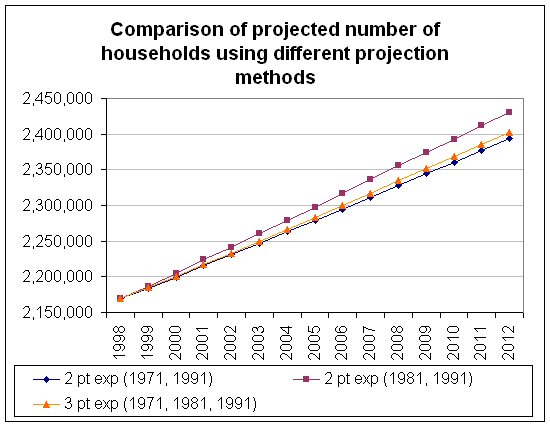 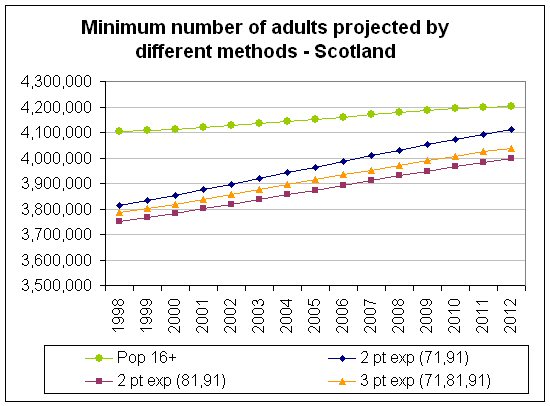 The decision to use the two-point exponential method with 1981 and 1991 Census data, was made as the minimum number of adults projected from this method could be satisfied by NRS's 16+ population projections for all but two authorities. There were shortfalls for 8 authorities using the 1971 and 1991 Census data and for 3 authorities using the three-point exponential method. A similar check on the number of children was also undertaken and was satisfied for all three methods tried.

None of the methods, however, fully satisfied the condition of projecting a minimum number of adults less than the 16+ population projection for every authority for the later years. Although the 2 point exponential method with 1981 and 1991 Census data satisfied the condition for most authorities, there were two authorities where a very minor adjustment was required. The adjustment involved a slight reduction in the number of larger households projected for the two authorities, offset by an increase, of the same amount, in the number of smaller households. This had the effect of reducing the projected minimum number of adults whilst not affecting the total projected number of households for each authority. The adjustment was made proportionately across the different age groups.