Following a steady decline over most of the 1980s, small increases in the population of Scotland were recorded in each of the seven years up to 1995 followed by a general decrease up to 2002. The 2002-based projection shows the total population of Scotland continuing to fall slowly from 5.05 million in 2002 to 4.94 million by 2018 (falling below 5 million in 2009). The slow but steady population decline is a result of the increasing excess of deaths over births, and a modest but continuing decline.

Council and health board areas 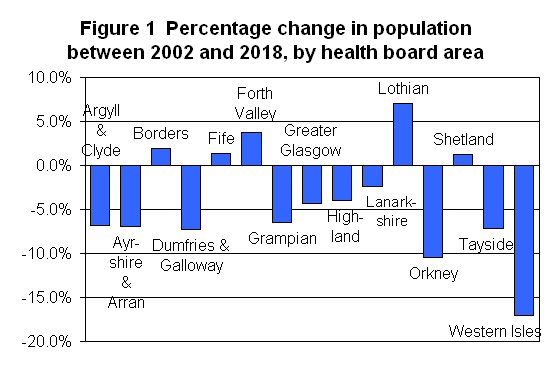 Amongst council areas, the largest percentage gains in the period 2002 to 2018 are 15 per cent for West Lothian and 12 per cent for East Lothian (Table 1). Over the same period, Eilean Siar shows the sharpest decline (17 per cent), followed by Dundee City (14 per cent) and Aberdeen City (12 per cent).

Although there are differences from area to area, the general pattern is of an ageing population (Table 2 & Table 3 and Figure 2). 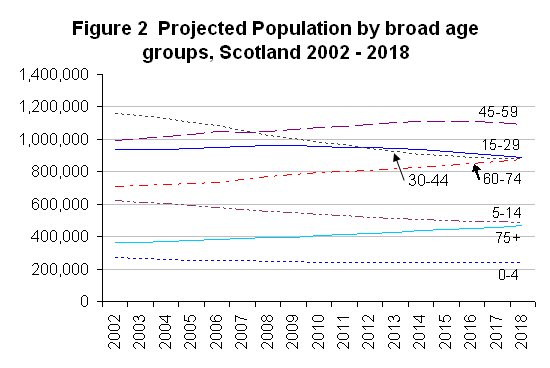 In the age range 15-29, the peak ages for migration, the population remains relatively stable across Scotland. The steepest fall by 2018 is Eilean Siar (-40 per cent). By the end of the projection period East Lothian shows the highest rate of growth at 32 per cent. The areas with the next greatest rate of growth are Stirling and West Lothian (16 and 15 per cent respectively).

For the majority of areas in Scotland the population aged 45-59 is projected to increase, the greatest changes by 2018 being increases of 35 per cent in West Lothian, 24 per cent in East Lothian and 20 per cent in Falkirk.

For those aged 60-74 an increase of 8 per cent is projected to 2008, with a strong rise thereafter. Aberdeenshire, West Lothian and Shetland Islands, show particularly strong rises (+55 per cent, +45 per cent and +38 per cent respectively by 2018). Glasgow City is the only area with a small projected fall, at 2 per cent. The projections assume that mortality rates in Glasgow City continue to be considerably higher relative to Scotland as a whole (Appendix C).

There continues to be strong projected growth in the very elderly (i.e. 75 and over). The largest increase appears in West Lothian (+64 per cent by 2018), followed by Aberdeenshire (+56 per cent) and Clackmannanshire (+47 per cent). The only decrease is found in Glasgow City (-7 per cent).