NOTE:The tables associated with this paper are available for downloading in Adobe Acrobat Format

In 1991 the Registrar General published a booklet entitled Personal Names in Scotland which gave information on names appearing on the statutory registers for 1990. The booklet covered surnames as well as forenames and gave some comparisons with similar surveys that had been carried out in 1858, 1937, 1958, and 197

During the 1990s the Registrar General has published annual lists of the most popular forenames. This paper presents provisional information for births registered in 2000. Additionally, it considers the most popular forenames of the last decade and gives some comparisons with new analyses for 1900, 1950 and 1975. A future Occasional Paper will return to the topic of surnames.

The most popular forenames in 2000

Table 1 below gives a provisional list of the top twenty boys' and girls' names during 2000. The table also shows changes in the rankings since 1999.

As in 1999 Jack was the favourite name for boys. In fact the top four boys' names (Jack, Lewis, Ryan and Cameron) were the same as in 1999. There were three new entries in the top ten: Matthew up from 13th place to 7th place, Callum up from 12th to 9th and Jamie up from 16th to 10th. There were no major moves in the top twenty and in the top fifty only Luke, up from 52nd to 39th showed a change of more than ten places.

For the third year in a row Chloe was the top choice for girls. Amy and Lauren were equal 2nd, both up a few places on 1999. However, there was little change in the top ten with only one newcomer, Hannah, up two places to 10th. As with the boys there were no major movers in the top twenty, but lower down the top fifty Beth (32nd) and Leah (35th equal) both rose by over twenty places.

There was a fair degree of agreement around the country with Jack top in 9 of the 32 council areas and Lewis in 8; for the girls, Chloe was top in 15. Similar analyses for England and Wales also showed Jack and Chloe to be the most popular names in 2000.

Here are the top ten names in each of the 32 council areas.

More information for England & Wales can be found at www.statistics.gov.uk

The most popular names of the 1990s

Some comparisons with earlier years

Since the 1991 booklet was completed it has become possible to use computerised indexes to the birth registers to analyse first forenames for any chosen year. For this paper counts were carried out for 1900, 1950 and 1975.

Table 3 gives the top ten names for boys and girls for each of these years together with the provisional lists for 2000. It also shows the percentages of births in each year given these names.

*Data for 2000 are provisional

The top ten names for boys in 1900 and 1950 are remarkably similar. The top eight names are the same; and the top four names (John, James, William and Robert) have the same positions.

For girls the similarity is less striking, though the top three names are the same, albeit in a different order. Three further names, Agnes, Catherine and Helen, appear in both lists and Annie is replaced by Anne.

The number of names used

Table 4 presents the changing popularity of the top ten names in 1900 during the twentieth century. For boys only James is in the top ten in each of the years shown; Andrew would also have achieved this but for a fall to 11th place in 1950. All the others remain in the top hundred throughout with the exception of Charles in 2000. The sub-table for girls highlights the extent to which the top names of 1900 have fallen out of popularity, with only Catherine and Elizabeth still in the top hundred for 2000. 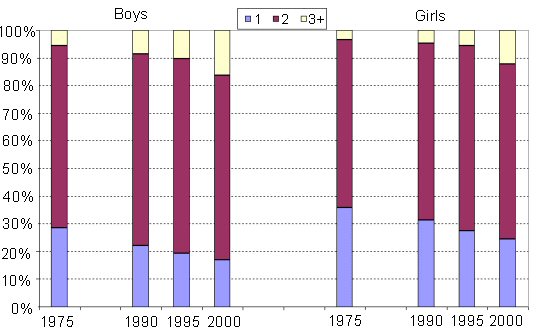 The Registrar General's registration records, which date back to 1855, have been augmented to include a computerised index to the Church of Scotland parish registers back to 1553. This has enabled customers to analyse the frequency of occurrence of Scottish forenames and surnames over four centuries. For further information on the availability of data please contact Statistics Customer Services (email: statisticscustomerservices@nrscotland.gov.uk).

There are many websites dedicated to name lists. The one given below give much background information and links to other sites of interest.

Notes on the information presented