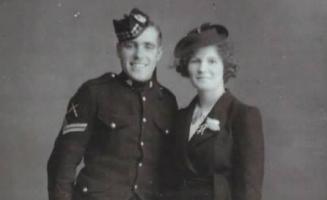 The annual release of births, deaths and marriages on ScotlandsPeople by the National Records of Scotland includes digital images of 110,000 birth entries from 1916, more than 47,000 marriage entries from 1941 and 64,000 death entries from 1966. They are now available for members of the public to search, view and save.

Among the notable Scots whose births were registered in 1916 are Jessie Kesson, the author of ‘Another Time, Another Place’ and ‘The White Bird Passes’, and Jack Milroy, the comedian who partnered Ricki Fulton on stage. We also explore the battles and heroes who inspired babies’ names during the First World War.

From the marriages registered in 1941 we feature the story behind the wedding photograph belonging to a ScotlandsPeople user, and a contrasting tale of a Clydebank couple whose marriage was cut short by war. Of the 64,000 deaths in 1966 we have selected Alexander Carrick, one of Scotland’s leading monumental sculptors.

Learn more about their stories on the ScotlandsPeople website.

"The releases of these records give us a richer understanding of Scotland’s story and our people. The marriage certificates from the early '40s in particular provide further insight into the consequences of the Second World War, and how it affected the things we take for granted today.

"I’d encourage anyone interested in finding out more about their local history or genealogy to have a look at the wealth of records now available as part of our new ScotlandsPeople website. No matter where you are in the world, you can instantly find out more about your own personal story."

Every year on 1 January new data collected by the Registrar General for Scotland becomes available to the public online via the ScotlandsPeople website. The records can also be searched at the ScotlandsPeople Centre in Edinburgh and at local family history centres in Glasgow, Kilmarnock, Alloa, Hawick and Inverness. The statutory registers are opened to the public online when their closure periods end: 100 years for birth records, 75 years for marriage records and 50 years for death records.

Since the new site launched in September 2016 users have been able to search statutory record indexes including birth, death and marriage certificates for free. Users are now only charged if they wish to view or download a record image.