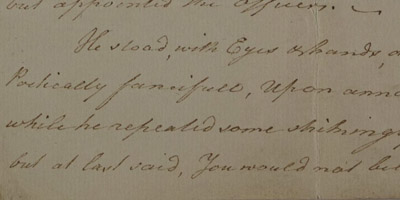 Records shed light on the Bard’s politics and character

Two newly-identified letters on display for the first time at National Records of Scotland (NRS) reveal how Robert Burns was viewed by his contemporaries.

The letters, written by John Mitchell, Burns’ boss, to one of the poet’s most important patrons, Robert Graham of Fintry, will inform debate on the extent of the Bard’s radicalism.

The first letter, written in 1789, describes how on being told he had been appointed as an excise man, Burns “…stood with Eyes & hands, directed upwards, in an attitude Poetically fancifull.”

The second letter, from 1796, makes arrangements for providing for Burns’ family after his death – and shows what Mitchell thought of Burns’ radicalism. He writes:

“He had certainly many shining qualities, blended with foibles of various kinds, the most irreconcilable whereof were his political principles, which somehow unluckily was rooted, & proves now a drawback to the humane feelings of many, but such a Genious as he possessed behoved to have eccentricities of some kind or other.”

These remarkable documents are being displayed for the first time alongside other unique treasures from the National Records of Scotland (NRS), including a rare document in the poet’s own hand writing, as part of ‘Robert Burns: Radical Exciseman’, a free exhibition running in General Register House in Edinburgh from 25 January to 23 February.

“These newly-identified documents on display at National Records of Scotland shed a fresh ray of light on Robert Burns, his character, his beliefs and his career.

“I would urge people to celebrate Burns Night by finding out more about the Bard at this fascinating exhibition.”

“This is a rare opportunity to see documents about Robert Burns written by those who knew him, as well as a document in the poet’s own handwriting.”

“The newly discovered letters confirm Burns’s enthusiasm for the Excise service, where he found many likeminded individuals and an amenable space in which he could develop an increasing enthusiasm for political reform. This is the paradox of his life in this period: government service and a potentially sceptical attitude towards government”.

The documents form part of the Graham of Fintry papers, which were acquired for the nation by National Records of Scotland in 2009.

More information is available on our Exhibitions Page. To see our current programme of talks relating to Robert Burns and the work of National Records of Scotland, see the Events, Talks and Visits section of this website.