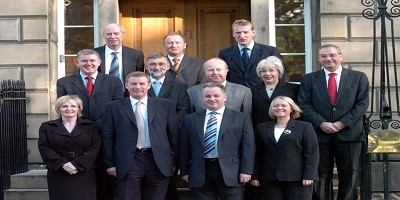 Files to be opened for the first time at National Records of Scotland reveal Scottish Cabinet discussions during 2005.

The Scottish Cabinet Records cover a wide range of discussions that year, including the G8 summit at Gleneagles; child protection measures; plans for a potential new road bridge over the Forth and a new Borders railway.

These records will be made available to the public as part of the Scottish Government’s commitment to proactively release public records after 15 years.
The records will be publicly accessible via a new online public access service in February 2021, the first time that Scottish Cabinet Records have been made available to view at home.
Welcoming the latest release, Paul Lowe, Chief Executive of NRS, said:

“The Scottish Cabinet Records release gives us the chance to revisit and more fully understand recent events and they provide a valuable insight into the previously unseen workings of our democracy. I am particularly pleased that we will make use of technology to make these records more accessible than ever before and to a much wider public audience.

“These records cover a wide range of fascinating topics, including implementation of the Freedom of Information (Scotland) Act and discussions of Scotland’s readiness in the event of an outbreak of Avian flu.”

“We are pleased to work with National Records of Scotland in delivering on the Scottish Government’s commitment to openness and transparency.

“I would like to express my gratitude to NRS for the ingenuity they have shown in embracing alternative technological solutions to overcome the challenges faced this year.

“These records are always of great interest to journalists, historians and members of the public who want to find out more about Scotland’s history and governance.”
Alternative arrangements are in place to answer public requests before launch of the full public access service. Contact NRS via email for further information.