Guide to the Garden

Guide to the Garden

The Archivists' Garden was conceived and coordinated by David R Mitchell, Curator at the Royal Botanic Garden Edinburgh, who also researched and produced the interpretation. It was designed by Gross Max using his plant palette.

The garden occupies the space between General Register House and New Register House. Within the two buildings information is filed and indexed in an ordered, logical way. The human mind is not like that. Living memories are random and incomplete. This fact is mirrored in the garden layout which is planted in flowing patterns - to suggest the randomness of memory and to replicate the shapes on the surface of the human brain.

Guide to the plants in the Archivists' Garden 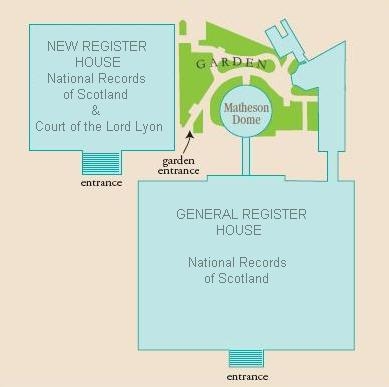 Detailed information has been collated by the cultural association of each species - Events (Birth, Marriage or Death), Famous Scots, Heraldry, Homecoming or Tartan.

The role of plants in Scottish culture

Much of the information is associated with the former cultural role of plants in people's daily lives. You may be surprised to learn that many of these traditional beliefs and associations were rooted in classical mythology, ancient legends and now forgotten religions.

One hope is that the garden can in someway reconnect visitors with the traditions of our ancestors through the stories which are told before the customs and beliefs are completely lost. For example, would it not be really good if we could return to the tradition of planting an apple tree to celebrate the birth of a boy and a pear for girl? Do you know why they did that? Or what about the link between almonds, marriage and Robert Louis Stevenson, never mind your wedding cake!

Some plants have a direct link with tartan - through plant dyes - relating the garden to the Scottish Register of Tartans. References to heraldry are also made in recognition of the strong connections between the plants and the work of the Court of the Lord Lyon.

Symbols are a useful means of communicating information quickly. In older, more rural cultures, the shapes and colours of plants were an obvious source of imagery. In Scotland, plants have long been used to represent clans and families - as the plant badges of the clans or as elements in heraldry. And, of course, they represent countries: the thistle of Scotland; the rose of England.

Plants also came to represent events - such as weddings or funerals - and emotions. Some of these associations are ancient, originating far from Scotland in the mythologies of other cultures. This symbolism peaked with the Victorians who developed a 'Language of Flowers'. The link with emotions fed naturally into artistic expression, and flowers are often used as symbols in poetry.

Some of the fascinating stories associated with more familiar plants such as rowan and heather are also told in detail, highlighting their cultural significance to Scots at home and abroad. Where possible, associations have also been made between the plants and famous Scots. Some of these have been enlightening, shocking and amusing, with tales of good deeds, murder and high jinks coming to light.