This form of the grape hyacinth is originally from the Mediterranean and Turkey. Like other hyacinths it was closely associated with the earth goddess Demeter. As she was the guardian of women it was often worn as part of a bridal crown.

The Ancient Greeks regarded it as a flower of death and in many European cultures it was associated with remembrance. This is a reflection of its connection with the myth of Hyakinthos, who through an act of the gods was killed by his friend Apollo whilst throwing a discus. Weeping for his friend, Apollo stated that a flower would eventually bear his tears, instantly blossoms are said to have sprouted from the blood of Hyakinthos, these were reputedly what we know as hyacinths today.

In the Christian faith it is seen as a symbol of wisdom, and tranquility and like many other plants it often appears in religious works of art. In the language of flowers the various colours have different meanings ranging from white for discreet love, to mauve for mourning.

The respected Scottish Zoologist and Classical Scholar Sir D'Arcy Wentworth Thompson (1860-1948) wrote about his theory of transformation involving the body as a whole and the mathematics behind nature. In his classic of modern science and biology 'On Growth and Form' (1942) he stated in the chapter on leaf arrangement: "The beautiful configuration produced by the orderly arrangement of leaves or florets on the stem have long been an object of admiration and curiosity".

In a subsequent chapter he also describes the science behind the form of a hyacinth leaf, which grows continuously from the base. The garden is in fact filled with the natural wonders, shapes and forms he strove to understand mathematically. 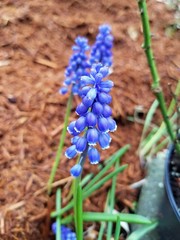 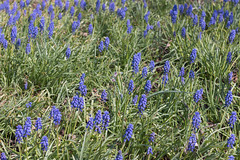