Thyme, like many other scented plants, is steeped in mythology. In ancient Greece and Rome it was seen as a symbol of strength, power, courage and sacrifice, it was even embroidered on the togas of the generals. During the crusades it was given to knights about to go into battle to give them strength.

Perhaps because of this thyme is the plant badge of the Clan Armstrong, which originates from around Liddlesdale in Roxburghshire. Renowned for their strength, by 1528 the clan was said to have been able to put 3,000 horsemen in the field. Despite this, or perhaps because of it, the clan had a turbulent relationship with the Scottish Kings, particularly James V (1512-1542) who as a result of a ruse captured and hung some 50 members of the clan, including the famous border reiver Johnny Armstrong (died 1529) of Gilnockie near Langholm. His last words were reputed to be "I am but a fool to seek grace at a graceless face, but had I known you would have taken me this day, I would have lived in the Borders despite King Harry and you both." This defiance is commemorated in the famous Border ballad:

Johnny Armstrong
Farewell! my bonny Gilnock Hall
Where on Esk side thou standest stout
Gif I had lived but seven yeirs mair
I wad a gilt thee round about
John Murdered was at Carlinrigg
And all his gallant companie;
But Scotland's heart was ne'er sae wae
To see sae mony brave men die.

Due to its antiseptic qualities and connections with birth thyme has since the time of Dioscorides (c50 AD) been thought of as a woman's herb - it was even placed under the bed of those about to give birth. Like many other sweetly scented plants it was thought to contain the souls of the dead. 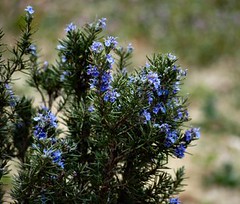