The hazel is native to Britain, Europe and Asia. The durable timber has many uses ranging from hurdles, wattle and daub to walking sticks, bean poles and even divining rods. It has been considered sacred in many cultures since ancient times being seen as a gift from the gods.

In the Celtic world it is sacred to the sea god Manannan. It was also associated with fairies and considered to ward off evil. St Patrick is reputed to have driven the snakes out of Ireland with a hazel wand. It was also seen as a tree of knowledge and many thought that wisdom was imparted from it through the edible nuts, which make excellent eating. In Scotland they were also processed into milk in the autumn to feed new born babies in the belief that it would provide them with good luck and fine health. The nuts are also associated with fertility and marriage, being given out at weddings in the hope that the couple would be blessed with numerous children.

Hazel is the plant badge of the Clan Colquhoun which dates back to the 13th century and a grant of land near Dunbartonshire. Famous members of the Clan include Patrick Colquhoun (1745-1820), a former provost of Glasgow and tobacco merchant, who later became a reformer and statistician.  He founded the Glasgow Chamber of Commerce (the oldest of its kind in Britain) and the Thames River Police.

More recently the Scottish painter, printmaker and set designer Robert Colquhoun (1914-1962) became one of the leading artists of his generation after studying at the Glasgow School of Art and later throughout Europe.

The twisted ornamental form growing in the garden is affectionately known as 'Harry Lauder's Walking Stick' in deference to the well-known comic singer, born in Portobello in Edinburgh, Sir Harry Lauder (1870-1950). Lauder regularly appeared on-stage with a gnarled old twisted staff whilst singing his famous song 'Roamin in the Gloamin'. 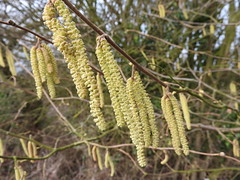 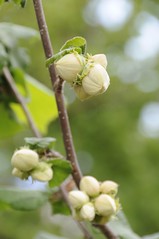