The honeysuckle or woodbine is one of our most celebrated native plants. Famed for its colourful and sweetly scented flowers it has been grown in our gardens since before 1600. It occurs naturally from Britain to Europe and Russia.

The Ancient Greek herbalist Dioscorides and the English herbalist Gerard both speak of its medicinal properties, reporting that it was good for the digestion. An ointment prepared from the flowers was also thought to remove freckles! In Scotland it was considered to ward off evil especially around May Day, when it was woven into a wreath, placed on the front door and in the rafters of byres.

Many Scottish poets have extolled its qualities, including Charles Spence (1779-1869) the 'Bard of Gowrie' or the 'Poet of the Carse'. A stonemason and sculptor, Spence was also a gifted, self-taught poet who deserves acclaim. Born in the parish of Kinfauns he spent most of his life near Rait. He built the Free Church of Errol and was involved in Kinnaird Castle's restoration. Some of his sculptures can still be seen in the grounds of Fingask.

His poetry was often humorous and gentle. An anthology of his work From the Braes of the Carse was published posthumously, containing many of his beautiful love poems including The Treasure of Love which refers to the honeysuckle.

Turn ye, Jessie, hither turn, / Treat my love no more with scorn;
In this honeysuckle grove / Let us sit and sing of love.
Let the rich make wealth their theme, / And their titled honours claim,
I nor wealth nor titles bring, / But I love, and love I sing.

The Aberdeenshire poet George P Dunbar wrote of it also in his Doric poem 'Granny's Gairden'.

It is the plant badge of Clan Maitland, one of Scotland's oldest Clans. Originally from Normandy, David I granted them land in Northumberland (then part of Scotland).

Through marriage they acquired further estates throughout Lauderdale in the Scottish Borders. Since the 1400's members of the family have regularly held high office in both Scotland and England, they have also served in the military and diplomatic services as well as the legal profession.

The family seat is Thirlestane Castle near Lauder, one of the finest houses in the land with decorative ceilings and a wonderful collection of art and antiquities. 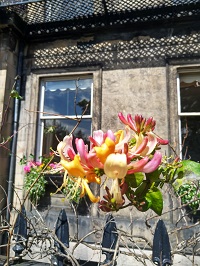 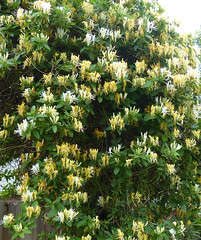