Native to Britain, Europe and parts of North America no plant apart from the thistle is more associated with the romance of Scotland than heather. For generations it has featured in our literature, poetry, music and song. Yet few realise that many of the vast expanses of heather that dominate our landscape are the result of deforestation, sheep and the establishment of grouse moors.

Martin Martin (died 1719) a Gaelic factor from Skye famed for his book 'A Description of the Western Isles of Scotland' 1703 discussed the health-restoring qualities of ling when it was used as a mattress.

Osgood Mackenzie (1842-1922) the founder of the famous west coast subtropical garden at Inverwewe also talks about its use in domestic life in his book 'A Hundred Years in the Highlands' (1921) which also explains the establishment of the garden. Evidence exists that heather has been used in brewing in Scotland since 2000 BC and today it is still produced in Argyll and marketed as Fraoch the Gaelic word for the plant.

Heather Ale
From the bonny bells of heather,
They brewed a drink lang syne
Was sweeter than honey
Was stronger than wine.

Bee keepers still take their bees to the heather in the flowering season as the honey produced is extremely sweet with a distinctive taste favoured by many around the world. The foliage and flowers were used to prepare a wide range of coloured dyes ranging from yellow through green to orange and brown. It was also used medicinally. The dried stems are made into besoms and brushes; this was once an important cottage industry in many rural areas. The stems were also bundled and bonded to make floor tiles, similar to the process used to make jewellery today.

White heather is the plant badge of the Clan McPherson who have a clan seat on land granted by Robert the Bruce near Badenoch. The clan was a strong supporter of the crown during the Jacobite uprising. 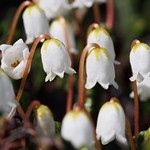 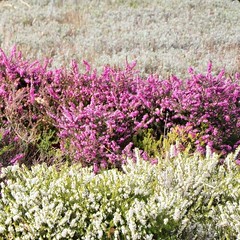