Ivy is native to Europe and Russia and has been cultivated in our gardens for centuries. It has been steeped in mythology and cultural meaning since ancient times. Originally dedicated to Osiris the goddess of motherhood in Egypt, and then later to Dionysus or Bacchus the Greek and Roman Gods of wine, the latter perhaps because it was thought to prevent drunkenness.

Another myth states that it grew around the altar of Hymenaios, the Greek God of Marriage. As such ivy was often presented to the bride and groom as symbol of everlasting life, devotion, fidelity and loyalty. The Greeks also used it to make a crown for Liber the God of fertility as well as poets and other muses. These ancient meanings were later adopted by the Christian faith, when it became a symbol of love, friendship, immortality and death. It is often seen carved on Christian tombs and was once placed on the graves of the dead on All Soul's Day.

By the Middle Ages these pagan meanings were deeply embedded in our cultural life, this was reflected in its use as a decoration at Christmas, a practice once banned by the Council of Churches due to its pagan roots. Carols such as 'The Holly and the Ivy' are thought to date from this time and may even be pre-Christian. Interestingly, by the Victorian era its use in this way was perfectly acceptable, perhaps a reflection of its place in the then accepted language of flowers. It is the plant badge of the Clan Gordon which dates back to 1150 and a first Grant of land near Kelso. Since then they have been central to the political and military life of Scotland and famed for their courage as well as the formation of the Gordon Highlanders. Two famous military heroes from the family include General Patrick Gordon of Auchleuchries (1635-1699), Commander of the Armies of Peter the Great of Russia and General Charles Gordon of Khartoum (1833-1835).

The family are also associated with the English poet Lord Byron - George Gordon Byron (1788-1824) the son of Scottish antecedents who was named after his grandfather on his mother's side, George Gordon of Gight Castle, Aberdeenshire.

Today Ivy is still regularly seen in bridal bouquets, but few will understand its ancient uses and meanings. 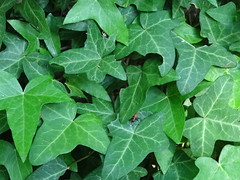 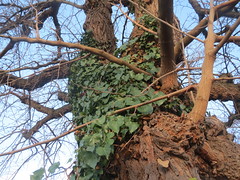