The Register of Neglected Entries was set up following the introduction of statutory civil registration in 1855.  It records births, deaths and marriages proved to have occurred in Scotland between 31 December 1800 and 1 January 1855 but which had not been entered in the Old Parish Registers.

Most of the register volumes contain only a few entries.  To retrospectively register an event you had to pay a fee and obtain a warrant from the Sheriff of the County.

The number of volumes per parish is given in the List of Old Parish Registers.  For example Lerwick (OPR 5) has one volume shown as RNE while Canongate (OPR 685/3) has five volumes shown as 5 RNE.

As entries are for the pre-1855 period they are included in the indexes to the Old Parish Registers.  The records are available as index-linked digital images on our Scotlandspeople website, in the ScotlandsPeople Centre and at Local Family History Centres.

In this example the birth of Janet Hutchison on 16 January 1847 has been retrospectively registered on 30 April 1884.  The entry is signed by the registrar and Stair Agnew, Registrar General for Scotland. 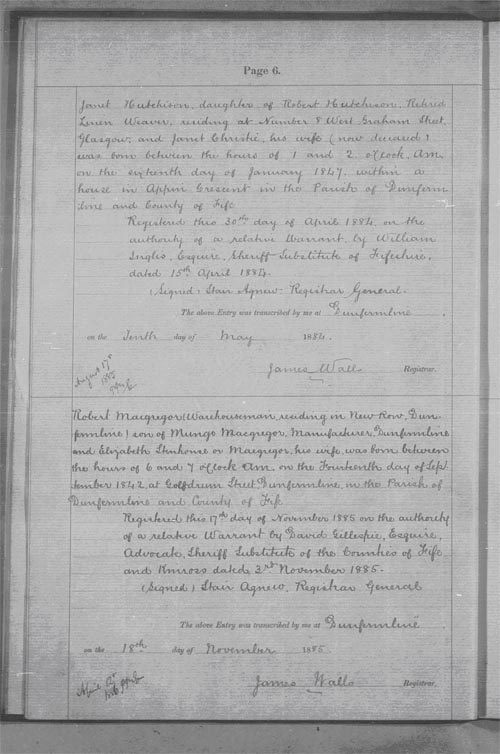