Mary, Queen of Scots (born Mary Stewart and, in French, Marie Stuart) reigned from 14 December 1542 to 24 July 1567. In lists of Scottish sovereigns she is recognized as Mary I.

Find out more and view the records of her marriage to Henry Stewart, Lord Darnley in the Hall of Fame entry Mary Queen of Scots (1542-1587 ). Click on the image to view the whole document. 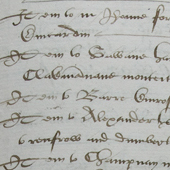 The Treaty of Haddington secured the support of the French against the English at the siege of Haddington. The price of this support was the marriage of Mary to the heir to the French throne. This extract is from the Accounts of the Lord High Treasurer. At the foot of the page, there is a payment to the pursuivant, John Paterson, who is to go to Kinghorn, Kirkcaldy, Dysert, Pittenweem, Anstruther, and Crail to recruit mariners to be pilots for the galleys which are to take the young Queen to France, July 1548. (Crown copyright, National Records of Scotland, E21/42 page 291) 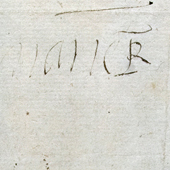 The spectacular entertainments at the baptism of James VI at Stirling Castle on 17 December 1566 involved banquets, dancing, masques and an outdoor mock siege of a fort performed before the ambassadors from France, England and Savoy. This warrant, signed by Mary, authorises the Treasurer to deliver 40 ells of taffeta in three colours to her servant Bastien Pagez, who also signs the document to acknowledge receipt of the cloth. Pagez was a loyal servant who followed Mary into exile in England with his family only returning to France after her execution. (Crown copyright, National Records of Scotland, E23/3 page 18) 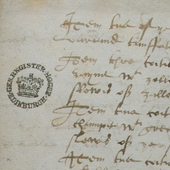 Mary had an impressive library. Some of her books, in French, Latin and Greek, are listed in this small inventory of books, church vestments and masquing clothes handed over by her servant Servais de Conde, to Regent Moray’s servants in November 1569. Mary’s court was the setting for lavish court entertainments involving music, drama and dance. The ‘Inventarie of the maskyne cleiss’ shown here, includes items of clothing in a range of bright colours. (Crown copyright, National Records of Scotland, E35/10) 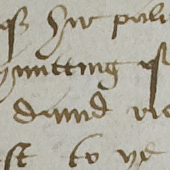 Extract from the minute book of the High Court of Justiciary recording the verdict in the trial of Thomas Scott of Cambusmichaell, Sheriff Depute of Perth, and William Harlaw and John Mowbray, burgesses of Edinburgh, for having held the Queen in captivity in Holyrood House after the murder of Rizzio. Scott was hanged and quartered. Harlaw and Mowbrey were spared, but their property was confiscated and they were sent into exile. (Crown copyright, National Records of Scotland, JC1/13) 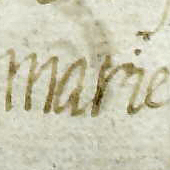 Mary’s earliest surviving letter written to her mother c.1550 when she was aged only seven or eight. Mary recommends the King of France’s envoy, Arthus de Maille, seigneur de Brezé. He has instructions to pass on news from the King, ‘which prevents me from writing you a longer letter’. De Brezé had accompanied Mary to France in the summer of 1548. It is likely that he was in Mary of Guise’s escort when she left for France to visit her daughter in autumn 1550. (Crown copyright, National Records of Scotland, SP13/71) 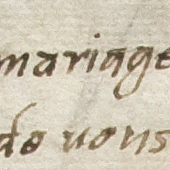 Mary married the fourteen year old Dauphin Francis in the cathedral of Notre Dame in Paris on 24 April 1558. In this letter written shortly afterwards to his mother-in-law, Mary of Guise, the new bridegroom expresses his happiness which, he adds diplomatically, could only have been enhanced by her presence. (Crown copyright, National Records of Scotland, SP13/80)