Saint Andrew is the patron saint of Scotland. His image, along with the 'saltire' (or diagonal cross) associated with him, was used on seals in Scotland from about 1180 onwards. In 1286, when Scotland was ruled by the Guardians of Scotland in the absence of a king, the saint was depicted on the Guardians' seal, used to authenticate their legal documents and communications to the rest of Europe. The seal included the inscription: "Andrea Scotis dux esto compatriotis" (Andrew be leader of the compatriot Scots). 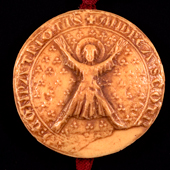 Facsimile of the seal of the Guardians of Scotland showing St Andrew on the cross, 4 July 1292 (Crown Copyright, National Records of Scotland, RH5/55)

Reference is made to St Andrew in the most famous claim to Scottish self-determination and what is probably our greatest documentary treasure: the letter of the Barons of Scotland to Pope John XXII, sent in April or May 1320, popularly known as the Declaration of Arbroath. The Declaration of Arbroath is written in Latin, but the English translation of the paragraph in question reads:

"The high qualities and deserts of these people, were they not otherwise manifest, gain glory enough from this: that the King of kings and Lord of lords, our Lord Jesus Christ, after his Passion and Resurrection, called them, even though settled in the uttermost parts of the earth, almost the first to His most holy faith. Nor would He have them confirmed in that faith by merely anyone but by the first of His Apostles - by calling, though second or third rank - the most gentle Saint Andrew, the Blessed Peter's brother, and desired him to keep them under his protection as their patron for ever."

You can see images of the more documents and seals relating to St Andrew on our feature on Saint Andrew and imagery associated with him on the National Archives of Scotland website.