The Lands Valuation (Scotland) Act, 1854 established a uniform valuation of landed property throughout Scotland, with separate rolls compiled for each county and royal burgh. The NRS holds copies of almost all the resulting valuation rolls from 1855 until 1989 (NRS reference VR), when the Community Charge ('Poll Tax') for domestic ratepayers was introduced and replaced the previous system. The valuation rolls that continue after 1989 are only for businesses that pay non-domestic rates. Again, the NRS has copies of these.

The rolls from 1854 to 1988 were collected annually and for each property record the name and designation of the proprietor, the tenant, the occupier and the annual rateable value. For the early years after 1854, there is little detail about properties rented at under 4 pounds annually unless they were on long leases. 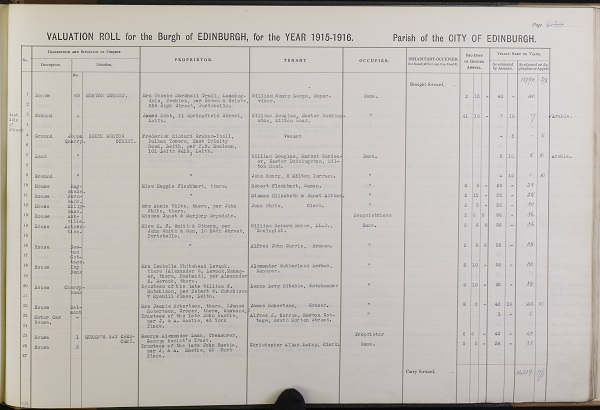 The format of valuation rolls and the timing of their compilation was laid down by the Lands Valuation (Scotland) Act 1854, which can be viewed on the UK Legislation website.

Preparation of valuation rolls and dating the information within them

The purpose of valuation rolls was to allow local authorities to have access to an accurate survey of the ownership, tenancy and occupancy of all properties (except those exempted) within each county or parliamentary burgh, to allow rates (local taxation based on rental value of properties) to be levied annually by local authorities (such as county councils, town councils, parochial boards and school boards) to levy local rates for services like poor relief, education, policing and public health.

The Assessor in each county or parliamentary burgh had to draw up a valuation roll by 15 August each year, to allow appeals by any owners and occupiers who disputed the rateable values by 15 September following. Once the appeal process had ended, the resulting roll was authenticated and was made available for public inspection. The roll was in force from Whitsunday in the year of collection to the Whitsunday following. In Scotland the legal quarter day of Whitsunday (or whitsun) was fixed at 15 May.

To summarise this process, using the example of the 1915 valuation roll shown above, the staff of the Assessor for the Burgh of Edinburgh would have carried out a survey of properties between autumn 1914 and summer 1915 and compiled the roll by 15 August 1915. It would purport to show the property owners, tenants and occupiers of each property in Edinburgh at 15 May 1915. After appeals had been dealt with and corrections made, the roll would be made available for public inspection on or before 15 September 1915.

Every six years the County Clerk or Town Clerk (or other custodian of the valuation rolls in each county or burgh)  had to send copies of the six preceeding valuation rolls to Register House in Edinburgh to become part of the national series of valuation rolls and it is this series which is held by National Records of Scotland (NRS). This periodic transmission also explains why some valuation rolls (especially for some small burghs) are bound up in 6-year volumes.

This timing of any changes to ownership of occupancy of a building can have consequences for when the changes appear in the valuation rolls. For example, if a tenant moved into a house in late 1915, after the assessor’s survey had been carried out, he or she would not normally appear in the 1915-16 roll and would first appear as tenant at this property in the 1916-17 roll deposited at General Register House.

So much for the theory. In practice, the way that each Assessor dealt with corrections and changes to the rolls varied and researchers and archivists frequently find anomalies in the recording of changing ownership and occupation of buildings (and of new buildings appearing for the first time). Local authority archives sometimes hold working copies of valuation rolls which have been marked up in manuscript by the Assessor's staff, which show changes during the year. Occasionally these manuscript changes are visible in the General Register House copies too, where a local Assessor has sent a working copy as one of the batches for preservation to Edinburgh.

A time-lag of one or more years is sometimes encountered, where someone using valuation rolls for legal purposes or historical research has evidence that a building was completed and in occupation or a change took place in one year, which ought to have been represented in the following year's valuation roll, but the change is not recorded until the roll two or more years after the change. For example, a new tenant might have taken a lease of a property in December 1894 and should therefore be recorded as tenant in the 1895-6 valuation roll, but does not appear until the 1896-7 roll. This unexpected time-lag is a very frequent occurrence in local archives and in NRS and it is hard to account for it and should be borne in mind when using valuation rolls for research.

The information you can find in a valuation roll varies slightly from year to year and between county and burghs. Early years tend to contain the least information. The 1855 valuation rolls for rural areas, for example, do not give a detailed address; merely recording the designation as, for example, 'House and Farm, Dykesmains'. This can also be the case in early rolls for towns and cities where the house or flat number of a property is omitted.

The later valuation rolls, include more accurate descriptions of properties and occupations are more frequently included. The following can be found in most valuation roll records:

The valuation rolls do not record the depth of information found in a census record and are not a census substitute in terms of listing all people resident at a property. On the other hand, valuation rolls attempt to give information on almost all buildings and other properties in a particular place, including those which do not appear on census records (because no-one was living there).

A project to index selected valuation roll years is underway and more information on this can be found on our page on Valuation Roll Indexes.

For valuation rolls which are unindexed some rolls, particularly for the more populous areas such as Aberdeen, Dundee, Edinburgh and Glasgow, can be awkward to search. For these areas there will often be several volumes covering each year. This can often mean a time-consuming search through the volumes in question before you find the entry for the property concerned.

Within each volume, the entries are arranged either by parish or (in cities and larger towns) by electoral ward, and below that level, by street and then by door number or house name. Consequently you may need to find out in which parish and/or electoral ward the property concerned was situated, before being able to identify the correct valuation roll for the relevant year. A local archive or library may have old Post Office directories or local gazetteers, which will often help you to obtain this information.

Because of the time-consuming detective work needed, staff at the NRS cannot search valuation rolls on behalf of correspondents. Duplicate original valuation rolls for specific areas may also be held locally on microfilm. You should check this with local libraries and archives.

With the exception of valuation rolls which were on microfilm and were converted to digital images, the valuation rolls for 1958 onwards are consulted in volume form and are currently held at our off-site storage facility, Thomas Thomson House. Before coming to see these records it is advisable to notify us beforehand, so that the appropriate records can be produced in advance of your arrival.