A project is underway at the National Records of Scotland (NRS) to index valuation rolls for selected years and to make the indexes (linked to digital images of relevant pages within the rolls) available online, as well as in the search rooms of the NRS.

The indexes can be searched according to person, group or place (including property type, settlement name, burgh or county). The information contained in the index consists of the description and situation of each property and its proprietor, tenant and occupier. Each index entry is linked to the digital image of the original page in the valuation roll.

What problems will I face when searching the valuation rolls? 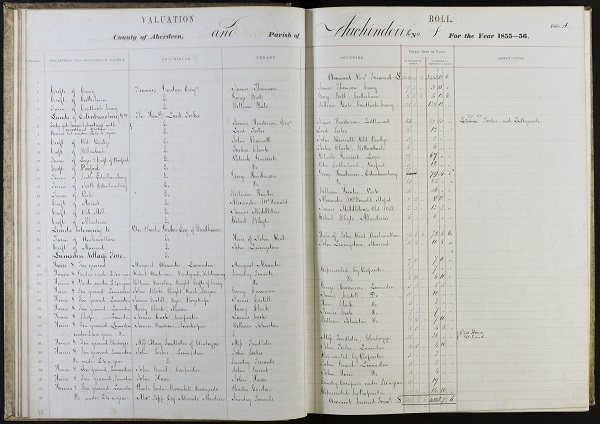 An example from an 1855 valuation rolls entry for the parish of Auchindoir in the county of Aberdeen highlighting properties that have not been numbered and are described the same (click on image to view the full size).

It was not until the mid-20th century that the production of valuation rolls became standardised across the whole of Scotland. Prior to this each county and burgh produced its own rolls and they were all recorded slightly differently, especially between 1855 and the late 19th century. Some rolls include information for several years on one page, while others record information for only a single year. Each roll can vary in the quality and quantity of information given and this can depend on a number of factors including the assessor recording the information, when it was recorded and in which county or burgh.

Here are a few things to bear in mind when attempting to search the valuation rolls:

There are abbreviations in the valuations rolls for occupations, marital status, buildings, status and many more. The assessors themselves did not provide a list of what the abbreviations meant but we have compiled a list of the more common abbreviations.

The spelling of a surname might not be as you expect due to:

Spelling of a forename might not be as you expect due to:

Forenames are captured as they are spelt on the valuation roll.

You would use this search if you are looking for a company (for example John Brown Ltd), multiple tenants, public authorities, churches, multiples owners (for example Mr and Mrs Smith, John and Jean MacDonald), trustees or heirs to individuals (for example the heirs of the late Robert MacKay or the trustees of Miss Elizabeth Black).

Not all names listed in a roll will be included in the group field. Where the names of heirs are listed along with the name of the deceased only the name of the deceased is captured for example (the heirs of the late Robert MacKay), where there is a list of multiple tenants or proprietors only the first one or two names are captured. This is due to the limited number of characters allowed per field.

Spelling of words in the group field may not be as you might expect due to:

This is a description of the property, usually an address. The level of description in each roll varies depending on who the assessor was; when and where the information was taken.

You will get more detail in the later years such as 1905, 1915 than in the earlier years such as 1855 or 1865; you may also get more information depending on whether the property in question is in the countryside or part of a town.

For example County of Ayr, parish of Ardrossan for the year 1905 one property is described as SHOP 59 GLASGOW STREET BURGH OF ARDROSSAN whereas a property in the more rural areas is describes as FARM AND HOUSE DYKESMAINS.

You can use this field to search for a street, property type, for example a shop, house or croft. You can also search using the number of the property if it has been captured.

This field is limited, it is not a free text search. You have to use wildcards to extend your search parameters

This option allows you to narrow your search by a county or burgh (for an explanation of these see our page on Counties and Burghs).

If you have no idea where a person lived you could select 'All records', but if you are searching using a very common surname this search will bring back too many results and you will be asked to narrow your search.

If you know which parish your ancestor lived in but not the burgh or county select 'All records' but then use the parish option to narrow your search, this will then result in all entries for that parish whether it existed in as part of burgh or county.

Select a specific parish to refine your search further. Alternatively, select up to five parishes at one time by holding down the control (Ctrl) key and clicking them.
If you know which parish your ancestor lived in but are not sure whether it was in a particular county or burgh, select 'All records' in the area field, then narrow your search by the particular parish in this field. This will return all entries matching your search criteria for that parish in all counties and burghs it appears.

If you select a parish from this drop down menu after selecting a particular Burgh or County in the 'Area' field, your page of results will be limited to parishes that appear in that Burgh or County.

For example, if you search for 'John Smith' in Kirkcaldy and Dysart parish, it will return all entries matching this search criteria from Kirkcaldy Burgh, Dysart Burgh and Fife County.

The spelling of place names varies throughout the valuation rolls but where possible we have standardised them.