The rationale for using two densities is that by doing so we identify both residential and non-residential parts of settlements. Unpopulated parts of a town, particularly industrial estates, should be identified by the inclusion of the threshold for the density of non-residential addresses. The rule, as worded above, can only be applied to small user postcodes because boundaries are not drawn for large user (LU) postcodes (refer to paragraph 2, second bullet). Each LU is accounted for by adding two to the count of non-residential addresses in the linked small user postcode before calculating the density.

7. The density threshold of 2.1 for residential addresses is broadly equivalent to the 5 persons per hectare threshold used to create 'localities' in 1991. (There are currently about 0.42 residential addresses per head.) The threshold of 0.1 for non-residential addresses was determined empirically by comparing the results of using this value with the maps for Clackmannanshire, the first council area in which the method (with various densities) was trialed. The maps below give an example of how the results differed when the density threshold was reduced from 2.1 to 0.2. In this council area, the above rule identified over 95 per cent of current postcodes within the 'localities' created for the 1991 Census, so good continuity is assured. It also identified as urban about a quarter of the postcodes outside 1991 localities. Some of these postcodes are expected not to survive the next hurdle in creating settlements described later (refer to paragraph 12). 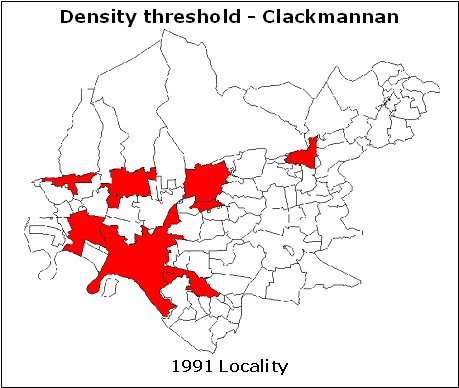 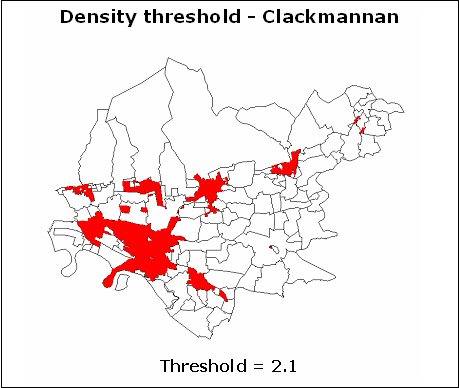 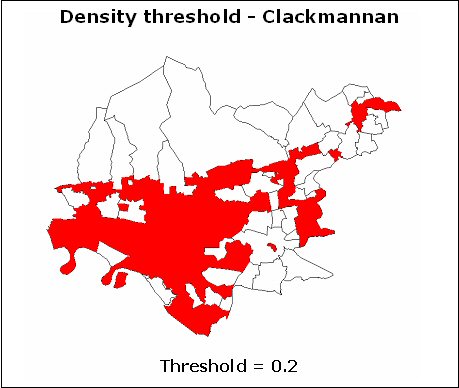