Non-standard threshold for density of addresses

8. The success of using the above thresholds for a relatively urban part of Scotland was not repeated when used for Eilean Siar. Very few of the relatively densely populated areas in this crofting area were identified. In order to 'recover' the bulk of the postcodes in 1991 localities, trial and error led to using thresholds as low as 0.14 and 0.01 for residential and non-residential densities respectively. The maps of Stornoway below show the difference between the 1991 locality and the urban areas recognised using the general threshold of 2.1 and the lower threshold of 0.2. Clearly the lower threshold produces a map much closer to the 1991 locality than the 2.1 threshold does. The 1991 localities in Eilean Siar are relatively low density with many of them added at the third stage of the 1991 Census process (refer to Annex B, paragraph 7). Table A shows that the average density in those postcodes in the 1999/2 index assigned to 1991 localities varied from almost 16 in Glasgow to below 1 in Shetland and Eilean Siar. 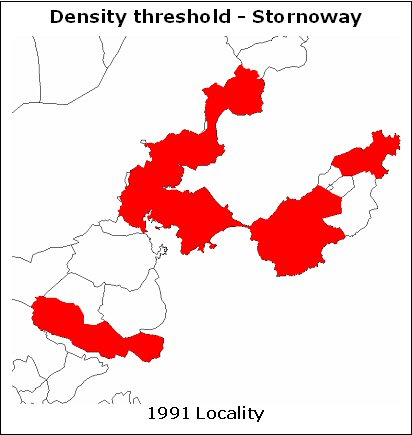 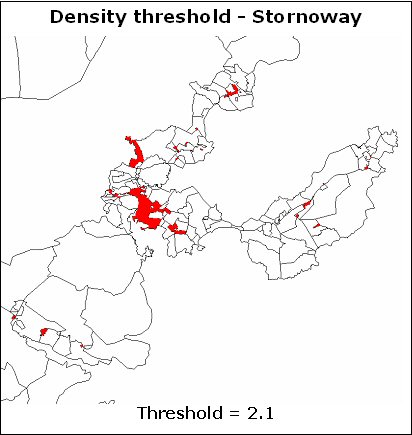 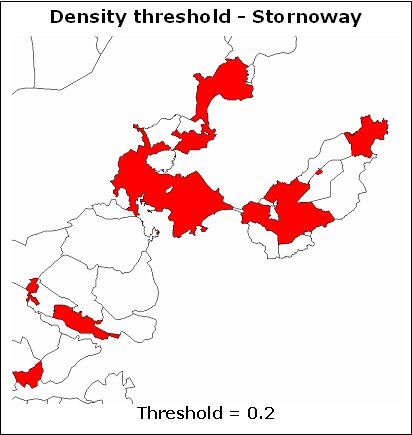 9. For the purposes of this paper, we have decided that we should accept the 1991 decisions about localities as valid. To provide for some continuity with 1991 and to account to some extent for the varying settlement patterns, particularly in crofting areas, we decided to vary the threshold for densities so that at least 95 per cent of the postcodes in each council area assigned to 1991 localities were identified as urban. In council areas where the standard values of 2.1 and 0.1 already produced an excess of 95 per cent, no change was made. Table B gives details for each council area showing the thresholds set and the resulting percentages. Note that refinement of the rule in paragraph 6 to take account of linked large user (LU) postcodes was added after the investigation of thresholds; so the calculations in the table will not precisely reflect a final assignment of 1999/2 postcodes to 'urban' or 'rural'. The LU refinement would give a slightly higher number of 'urban' postcodes.