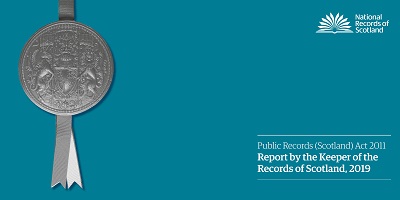 The Keeper’s Annual Report for 2019, published under the Public Records (Scotland) Act 2011, has been laid in the Scottish Parliament by the Keeper of the Records of Scotland. It summarises the sixth year of activity since the Act was implemented in January 2013.

You can view the 2019 report here on the NRS website. The main aim of the Act is to improve the quality of record keeping in approximately 250 named Scottish public authorities. It requires authorities to submit records management plans to the Keeper for agreement.

This year we successfully embedded the Progress Update Review (PUR) tool, allowing authorities to voluntarily update NRS on their progress under the Act. We also began the important process of updating the Keeper’s Model Records Management Plan in collaboration with public sector stakeholders and professional records and information colleagues.

The Act continues to support improvements in record keeping within the Scottish public sector. Our engagement with authorities helps to further promote the benefits of good records management and remains central to the Act’s success. Plans agreed show that good practice is being adopted and the Act continues to promote a new culture around record keeping.