Birch does not feature in Greek or Roman mythology, which is not surprising as it is not native to the Mediterranean. However, it appears in Celtic tradition as a symbol of the awakening of new life. This was once reflected by the use of birch twigs by the corn sheaf bridal figures used in the celebrations surrounding St Bridges Day each spring. Saint Brigid was the Celtic goddess of rebirth. In the language of flowers birch represents modesty and grace, hence it was refered to by Coleridge as the 'Lady of the Woods'.

In some parts of Europe it was known as the 'rod of life' and the bride and groom were often asked to step over a birch pole as they entered their new home, in the hope this would aid the coming of a family. In contrast, the dead were often covered in birch twigs - perhaps in protection from evil?

Birch had many practical uses which made it central to daily life. The timber was utilised in construction, basket-making and the manufacture of domestic items. The bark was used for candles, paper and tanning. A tea was produced from the leaves and used medicinally; they were also made into dye for wool used in weaving tartan and tweed. Wine was made from the sap and still is today. Through destructive distillation the sap was also processed into a sticky waterproof tar for the fishing and construction industries.

The traditional fiddler and composer James Scott Skinner (1843-1927) was also known as the 'Strathspey King'. Born in Banchory, Skinner went on to travel and perform extensively in Britain and America. Writing over 600 tunes, one of these was the slow air 'The Weeping Birch of Kilmorack'. The tune commemorates Skinner's visit to the Falls of Kilmorack on the river Beauly and the Pass of Dhreim with his two great friends Donald Morrison and Dr McDonald. During this visit Morrison told Skinner how previously a traction engine had fallen 100 feet from the road into the gorge, killing two men. After this happened a phenomenon reputedly occurred with most of the birches within 30 yards of the accident withering away without regeneration.

Extremely attractive, birches have often featured in oil and watercolour paintings. Even the Scottish portrait painter Sir Henry Raeburn (1756-1823) although not renowned for illustrating plants, could not resist their beauty. He often set his subjects, particularly women, in a romantic landscape featuring a wooded background. An especially fine example is the portrait of Mrs Downey of Prestonpans (c1787-1790). We see her in an imaginary mixed woodland of birch and beech. 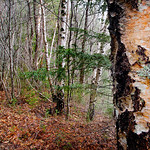