The flowers of this native plant have been used to flavour wine and make medicinal ointments and creams to improve complexion, memory and sunburn for a long time.

Robert Burns (1759-1796) wrote of it in his flattering song 'The Lass of Cessnock Banks' which celebrates his love for Alison Begbie (with 'rogeish een' - mischievous twinkling eyes) the daughter of a farmer from the Parish of Galston who turned down his request for marriage in 1781-82.

She is stately like yon youthful ash,
That grows the cowslip braes between...

It also appears in his 'Elegy on Captain Mathew Henderson' with whom he once shared accommodation in Edinburgh. The poem contains many references to this and other plants in the garden, including foxgloves and roses reflecting the deep affinity Burns had for the natural world.

Mourn, Spring, thou darling of the year!
Ilk cowslip cup shall kep a tear.

The ancient Greeks named the flower paralisos after a youth who was said to have died from grief after the sudden death of his sweetheart, Melicerta, whom the gods were thought to have turned into a primrose or cowslip. Shakespeare first wrote of it in his play Hamlet using it as reference to a path of uncertain pleasure, he also used it as a symbol of death in the play Cymbeline.

In Christianity Catholics link it to both St Agatha and St Bertulf.  It is also known as Our Lady's Keys as it is thought to represent the keys held by Mary Mediatrix to the store houses of heavenly grace. 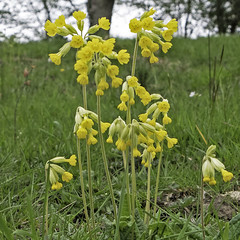