The statutory indexes from 1855 to the present day have been computerised since 1989. Today they include links to digital images of the register entries.

The index records the year of registration not the year of birth, death or marriage.  For example, a child born in late December will almost certainly be registered in the following year.

Up to 1965 registrars had to compile indexes for each volume of births, deaths and marriages. This example from the registration district of Rathven shows one of the pages at the back of the register volume for 1855 (our reference 1855/164). 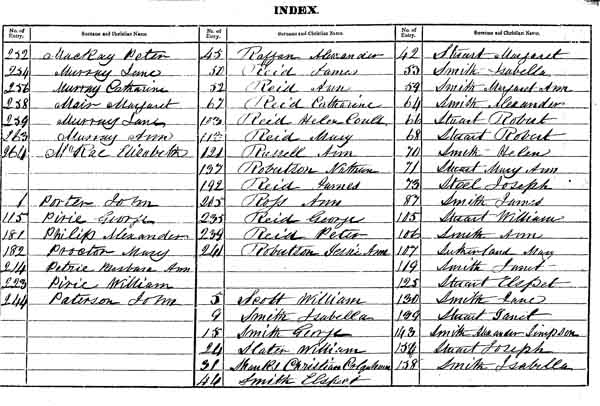 The Registrar General for Scotland's staff in New Register House compiled a general index of births, deaths and marriage with separate volumes for males and females. This pdf copy of Registrar General’s Office – Scotland. Index Branch. Instructions to Staff provides further details.  For example, “anonymous” is used in the index if there is no name recorded and more than one index entry is required for the "tee names" or "to names" used by the fishing communities in the north-east of Scotland.