The Statutory Register of Deaths contains detailed information about each person who has died in Scotland since 1 January 1855 and is of great value to researchers.  This guide covers:

For records of deaths overseas (including soldiers who died in the First World War) please go to our Minor Records guide.

Information Recorded in the Registers

For 1855 only the following information was included:

This page from the statutory register of deaths for the registration district of Drainie in Morayshire provides examples of how the information recorded can help with your family history research. 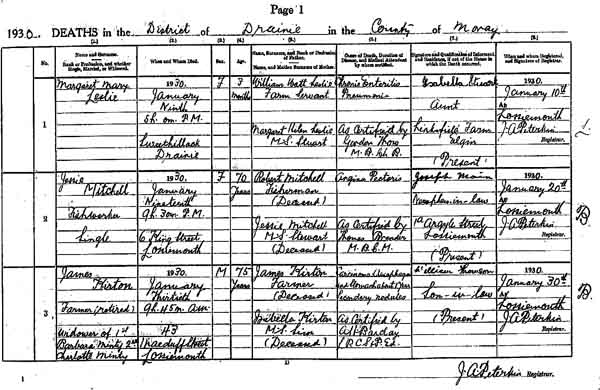 Deaths must be registered within eight days. In cases of accidental, sudden or suspicious deaths the cause of death may not have been established in that time. An investigation is carried out for the Procurator Fiscal who receives a full report into the death. This is known as a precognition and its findings are recorded in the Register of Corrected Entries (now the Register of Corrections Etc (RCE). A cross-reference to the RCE is added in the margin of the related entry in the Statutory Register of Deaths. If you find an entry with an RCE reference check below the statutory register image for the link to an image of the RCE page.

Analyses and tables of cause of death data are published in the annual reports of the Registrar General for Scotland.  The Registrars General have also compiled lists of cause of death and assisted with the classification drawn up by the Royal College of Physicians of London in the early 20th century.  Today deaths are coded according to international schemes.

Use of the Term Illegitimate

The use of the term “illegitimate” in column one of the birth and death registers was discontinued after 1918.  The Registrar General for Scotland issued guidance to registrars that it should no longer be used for new entries.  For pre-1919 records an official extract (or certificate) of a birth or death entry that contained the term had to be typed and “illegitimate” omitted.  It remains in the register entry which can be viewed as a digital image if the record is over 50 years old.