The Statutory Register of Marriages contains detailed information about each couple who have married in Scotland since 1 January 1855 and is of great value to researchers. This guide covers:

Information Recorded in the Register

In 1855 entries you will also find information about the place and date of birth of both parties; the number of any children by former marriages (whether living or dead);  and the number of previous marriages (if any).

From 1965 onwards the date of birth of both parties, addresses of witnesses and occupations of the mothers of the bride and groom has been recorded.

Here are some examples of how the Statutory Register of Marriages can help you continue your research in the birth, death, marriage and census records.

In the second entry in the example below the bride is described as a widow.  Her father’s surname is recorded and is her maiden name.  You can use this information, together with both her parents’ names, to trace her earlier marriage.

In the 1903 register of marriages for the registration district of Perth most couples married regularly after publication of banns according to the forms of the Church of Scotland (or of a different denomination).  This page from the register has an example of an irregular marriage (the first entry) and of a regular marriage according to the forms of the United Free Church of Scotland (the second entry). 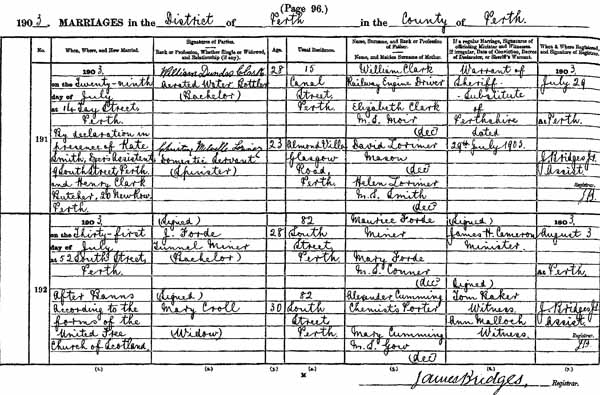 The irregular marriage was by declaration in front of two witnesses at an address in Perth (column one).  Column six records that the couple obtained a warrant from the sheriff substitute of the county to enable them to register their marriage officially.  Such irregular marriages were abolished by provisions in the Marriage (Scotland) Act 1939.  The Act also allowed for civil marriages to take place in registration offices.

For information about marriages at Gretna Green, Lamberton Toll and Coldstream please go to our research guide on Irregular Border Marriage Registers.

You won't find the term "of full age" because the exact age (as reported to the registrar) is recorded in the Scottish marriage registers.   It was legal for girls of 12 years and boys of 14 to marry up to 1929 although it is thought that marriages at such a young age were rare.  You can find out more about what was and is the minimum age for marriage in Scotland?  in the Registration area of this website.

It is illegal to marry someone who is closely related to you. Details are provided in tables of “forbidden degrees of kindred and affinity” which have separate columns for men and women. For example, a man may not marry:

There are approximately 30 prohibited degrees of relationship altogether.