These pages provide information about the background to the Bill, and links to relevant documents. For further information please contact Pete Wadley on 0131 535 1408 or email: public_records@nrscotland.gov.uk

The Public Records (Scotland) Bill received Royal Assent and was formally recorded in the Register of the Great Seal on 20th April 2011. The Letters Patent signifying Her Majesty’s Assent to the Bill was sealed with the Great Seal by conservation staff of The National Records of Scotland (NRS). This public records legislation was the first in Scotland for over 70 years. 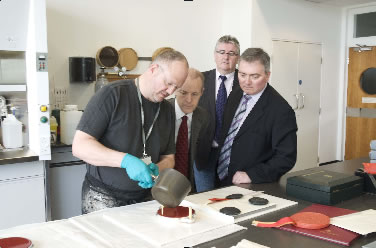 The historic event was witnessed by the Keeper of the Records of Scotland (George Mackenzie) and two of the Public Records Bill Team (Bruno Longmore and Hugh Hagan). The sealed Letters Patent was archived in NRS as part of our holdings of Parliamentary Acts.

Donald Campbell of NRS Conservation can be seen applying the Great Seal to the Letters Patent. The process involves pouring molten beeswax coloured with vermillion into the Great Seal matrix, a skilled process which has changed little in over 800 years.