The second case to reach the Court of Session featured David Spens (or Spence), a black enslaved man, and his master, Dr David Dalrymple, from Methil in Fife. From the first set of court papers (NRS, CS236/D/4/3 box 104) we know that Dalrymple was living in the West Indies when, for thirty pounds, he purchased an enslaved man known as ‘Black Tom’. Around 1768, he returned to Scotland bringing Tom with him as a personal attendant. Dalrymple intended to send Tom back to the West Indies but he fell ill. According to Dalrymple’s account, Tom wanted to help him get better and asked to stay in Scotland, to which he agreed. Prior to being returned to Grenada, Tom requested leave to be baptised, which was granted. He was baptised as David Spens, presumably named after Harry Spens (or Spence) the minister of Wemyss Church, where the baptism took place on 1 September 1769. A record of this baptism is held by the NRS in the Old Parish Registers (NRS, OPR for births in Wemyss, 459/30 page 250). For further guidance about these records, see our guide on church registers.

The next morning, on the day the newly baptised Spens was due to return to the West Indies he took refuge in the home of John Henderson, a local Kirk elder and farmer from nearby Methilhill; identified in Dalrymple’s account as 'a zealous seceder'. Spens and Henderson returned to Dalrymple’s house at Lindifferon, where Spens declared his right to freedom. 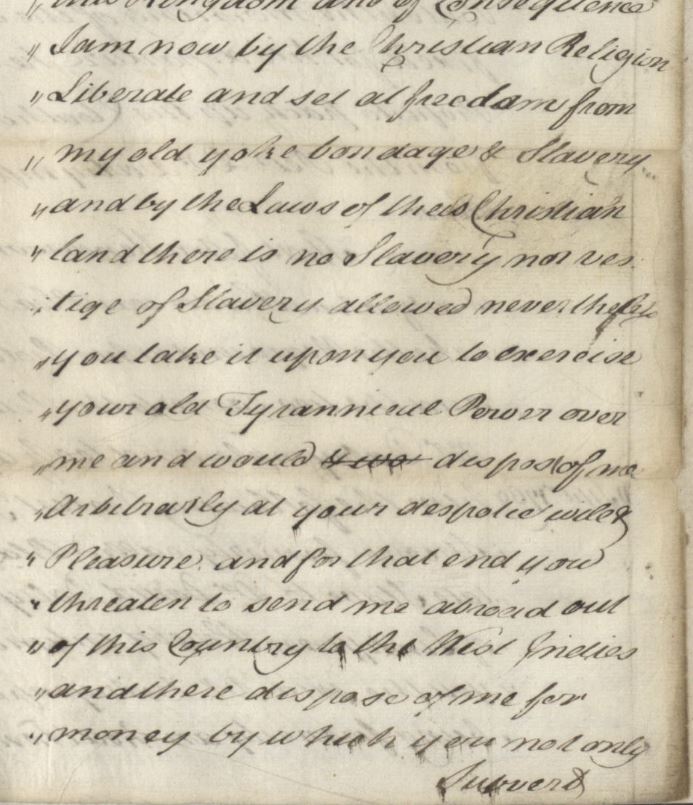 Quotation from the protest by David Spens and John Henderson to David Dalrymple stating that
Spens as a Christian is no longer an enslaved person and that in spite of this Dalrymple
still intends to 'dispose of' Spens overseas, 1770.
Crown copyright, National Records of Scotland, CS236/D/4/3/ Box 104, page 4

"I am now by the Christian Religion
Liberate and set at freedom from
my old yoke bondage & slavery
and by the Laws of this Christian
land there is no Slavery nor ves
tige of Slavery allowed nevertheless
you take it upon you to exercise
your old Tyrannical Power over
me and would dispose of me
arbitrarily at your despotic will &
Pleasure and for that end you
threaten to send me abroad out
of this Country to the West Indies
and there dispose of me for
money by which you not only
Subvert..." 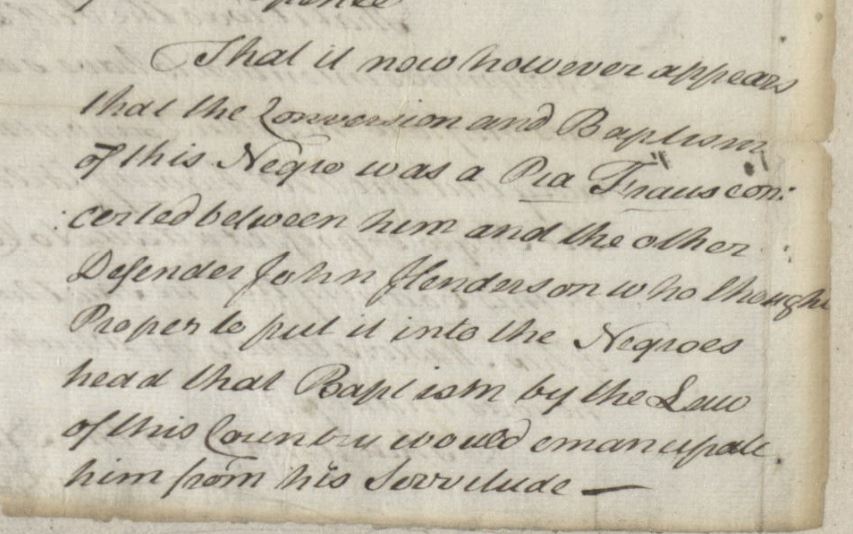 "That it now however appears
that the Conversion and Baptism
of this Negro was a Pia Fraus con
certed between him and the other
Defender John Henderson who thought
Proper to put it into the Negroes
head that Baptism by the Law
of this Country would emancipate
him from his Servitude..."

Dalrymple proceeded to make a process of declarator to the Court of Session claiming that he had right and title to Spens and to his services. Spens should be returned to him and damages and expenses paid, Spens now being worth sixty pounds. Consequently, both parties were instructed to lodge memorials with the Court of Session. Dalrymple would appear to have done so within a few days of the request and some weeks later complained to the court because Spens and Henderson still hadn't done so.

Dalrymple continued with legal steps, and, suspicious of a plot to remove Spens from the country, petitioned the court for his incarceration. On the 3 March 1770 a court order was served for Spens’ apprehension and the same month Spens was captured and imprisoned in Dysart jail, with security set at £30 for appearance at court. 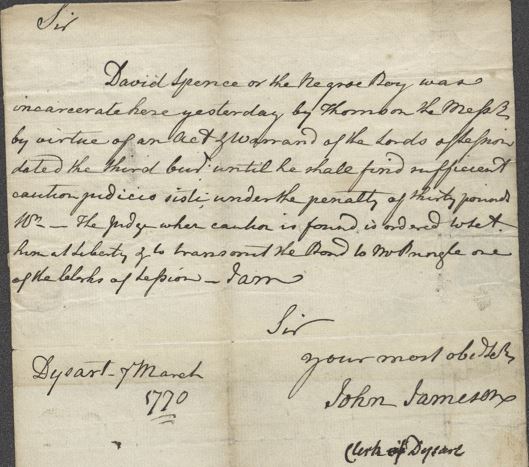 Letter from John Jameson to the court that David Spence was incarcerated in Dysart jail
on 7 March 1770 by Thomson the messenger. Crown copyright, National Records of Scotland, CS236/S/3/13

Sir
David Spence or the Negroe Boy was
incarcerate here yesterday by Thomson the Mess[enger]
by virtue of an Act of Warrand of the Lords of Session
dated the third but until he shall find sufficient
caution judicio sisti under the penalty of thirty pounds
W[illia]m - The Judge wher caution is found is ordered to set
him at Liberty & to transmit the Bond to Mr Pringle one
of the Clerks of Session. I am
Sir your most obed[ient] ser[vant]
John Jameson
Clerk of Dysart
Dysart 7 March 1770.

In the second bundle of papers (NRS, CS236/S/3/13) we find a petition and complaint from Spens that on returning from lodging the memorial in Edinburgh, a messenger of the court, Mr Thomson, arrested him and put him in Dysart jail. He alleged that it was a plot by Dalrymple to get him sent out of the country 'by violence' and asked the court to investigate the instructions that were given to the messenger by calling him to court. The thirty pounds caution (bail) required to get Spens out of jail was found by Walter Ferguson and William Chalmers, both writers to the signet (lawyers) in Edinburgh. The evidence from the court papers stops here, and Dalrymple died that year, and Spens gained his freedom by default before the judges had a chance to make a decision.

You can see the papers for the court case in the Historical Search Room at the NRS (NRS, CS236/D/4/3 box 104 and NRS, CS236/S/3/13). They can also be viewed on Virtual Volumes via the NRS' ScotlandsPeople service.

Related features on the NRS and SCAN websites

Read about the Montgomery v Sheddan case of 1756, the Knight v Wedderburn case of 1778, and about George Dale, a native of Africa and formerly enslaved man, whose life story was used as evidence by the Society for the Purpose of Effecting the Abolition of the African Slave Trade.