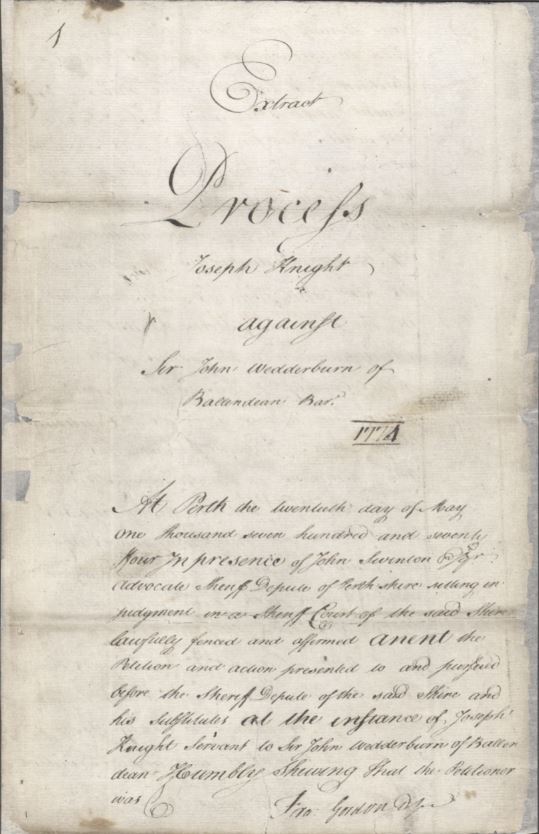 Transcription of image: Extract, Joseph Knight against Sir John Wedderburn of Ballendean Bar[onet]. 1774. At Perth the twentieth day of May one thousand seven hundred and seventy four In presence of John Swinton advocate Sheriff Depute of Perthshire sitting in judgment in a Sheriff Court of the said Shire lawfully fenced and affirmed Anent the Petition and action presented to and pursued before the Sheriff Depute of the said shire and his substitutes at the instance of the Joseph Knight Servant to Sir John Wedderburn of Ballendean Humbly Shewing that the Petitioner was...

Between 1756 and 1778 three cases reached the Court of Session in Edinburgh whereby fugitives from slavery attempted to obtain their freedom. The three cases were Montgomery v Sheddan (1756), Dalrymple v Spens (1769) and Knight v Wedderburn (1778).

The third, the case of Joseph Knight, was the only one decided by the Court. David Spens (previously 'Black Tom', belonging to Dr David Dalrymple in Methill in Fife) sued Dalrymple for wrongful arrest but Dalrymple died during the suit, and Spens was liberated by default. James Montgomery (formerly 'Shanker', the property of Robert Sheddan of Morrishill in Ayrshire) died in the Edinburgh Tolbooth before his case could be decided. Finally Joseph Knight was partially successful in arguing that Scots law could not support the status of slavery.

Knight's legal challenge began in 1774 in the Justices of the Peace court in Perth, where he sought the freedom to leave the employment of John Wedderburn of Bandean (or Ballendean) in Perthshire. Knight claimed that, although many years earlier he had been purchased by Wedderburn in Jamaica, the act of landing in Scotland freed him from perpetual servitude, as slavery was not recognised in the country. The Justices of the Peace found in favour of Wedderburn. However, Knight appealed to the Sheriff Substitute of Perth, William Mercer; both he, and the Sheriff Depute for Perth, John Swinton found that 'the state of slavery is not recognised by the laws of this kingdom, and is inconsistent with the principles thereof: That the regulations in Jamaica, concerning slaves, do not extend to this kingdom; and repelled the defender's claim to a perpetual service'.

Extract from page 34 of Knight v Wedderburn. Crown copyright, National Records of Scotland, CS235/K/2/2. Here a similar case which progressed through the English courts, Smith v Gould in 1706, is referenced.

Transcription of image: Book first Chapter fourteenth Treating of Master and Servant Says, "And now it first laid down (Salk: 666) That a slave or Negroe the Instant he lands in England becomes a free man that is the Law will protect him in enjoyment of his person And his property Yet with regard to any right...

Wedderburn appealed to the Court of Session, Scotland's supreme civil court. He argued that slavery and perpetual servitude were different states, and that in Scots law, Knight, even though he was not recognised as a enslaved person, was still bound to provide perpetual service in the same manner as an indentured servant or an apprenticed artisan.

During the case Wedderburn’s advocate, James Ferguson, is at pains to highlight what his client has done for Knight: meeting the costs of his marriage to Annie Thomson from Dundee; making arrangements for the baptism of their child and his burial after death; and enabling Knight to become literate. It is claimed in the case, that Knight’s ability to read and write are what prompted his bid for freedom. Knight refers to the ruling of the Somerset case in 1772, when Lord Mansfield refused to allow the forcible return to Jamaica of a fugitive from slavery in England and then ruled that 'no master ever was allowed here (England) to take a slave by force to be sold abroad because he deserted from his service'. Given this reference, it seems likely that Knight read and understood the judgement by Lord Mansfield to mean that no one could be held in slavery in Britain. While legally this was not the case, it clearly inspired Knight.

The records relating to the Knight v Wedderburn case survive among the Court of Session records in the NRS (CS235/K/2/2). They consist of five bundles of papers, including an extract of process by the Sheriff Depute of Perth (20 May 1774), an extract of process by the Lords of Council and Session (30 May 1774), and memorials for John Wedderburn and Joseph Knight (1775). Of these, the memorials are the most interesting. In their respective memorials each man presents his side of the story and legal arguments concerning the definition of perpetual servitude. Wedderburn blamed Knight's relationship with another servant, Annie or Anne Thomson, and her subsequent pregnancy, as the cause of their dispute and Knight's desire to leave his service. Indeed, upon discovering Thomson’s pregnancy, Wedderburn dismissed her from service, refused to hire her back, or to provide a house nearby where Knight and Thomson could live together. Part of Knight’s motives in leaving appear to be his desire to live with his wife, and to have the freedom to make an income which might support them and their child.

Knight's 40-page memorial includes an account of his life (including his baptism and marriage in Scotland), evidence - partly in French - on enslavement of Africans by their chiefs as judicial punishments, and descriptions of the miseries of slavery in the colonies. Many of the sources relating to the slave trade in NRS are from the estate papers of landowners in Scotland who owned plantations in the colonies. Letters, inventories and, occasionally, plans can be an excellent source when researching the lives of those enslaved, their living conditions, and attitudes towards slavery in the colonies. However, it is rare to find information about individuals and their lived experience. Accounts like Knight’s, while clearly developed for his legal case, still provide an invaluable insight into his experience as an individual and the attitude of the community around him towards slavery.

Despite Wedderburn's evidence, the Court of Session ruled that 'the dominion assumed over this Negro, under the law of Jamaica, being unjust, could not be supported in this country to any extent: That, therefore, the defender had no right to the Negro's service for any space of time, nor to send him out of the country against his consent: That the Negro was likewise protected under the act 1701, c.6. from being sent out of the country against his consent.' The judgements of the Sheriff were approved of, and the Court remitted the cause simpliciter (that is, it rejected Wedderburn's appeal without qualification). 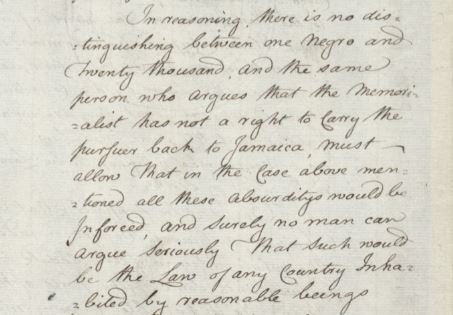 Another extract from Knight v Wedderburn, which is part of the Wedderburn (or the Memorialist's) defence.

Transcription of image: In reasoning there is no distinguishing between one Negro and Twenty thousand and the same person who argues that the Memorialist has not a right to Carry the pursuer back to Jamaica must allow That in the Case above mentioned all these absurditys would be Inforced, and surely no man can argue seriously that such would be the Law of any Country Inhabited by reasonable beings...

Knight succeeded in arguing that he should be allowed to leave domestic service and have the ability to provide a home for his wife and child. In doing so he gave the Court of Session the opportunity to declare that slavery was not recognised in Scots law and that fugitives from slavery (or 'perpetual servants') could be protected by the courts if they wished to leave domestic service or if attempts were made to forcibly remove them from Scotland and return them to slavery in the colonies.

Joseph Knight was granted his freedom with a majority verdict of eight to four. The reasoning for each judge’s vote varied significantly, but the court accepted Swinton’s judgement, even if such a strong statement against slavery was not necessarily a conviction shared by all of the judges.

You can see the papers for the court case in the Historical Search Room at the NRS (NRS, CS235/K/2/2). They can also be viewed on Virtual Volumes via the NRS' ScotlandsPeople service.

Related features on the NRS and other websites

Read about the Montgomery case of 1756, the Dalrymple v Spens case of 1769, and about George Dale, a native of Africa and formerly enslaved, whose life story was used as evidence by the Society for the Purpose of Effecting the Abolition.