The first case involving the recovery of enslaved people in Scotland occurred in 1756. James (or Jamie) Montgomery, formerly 'Shanker', was brought by Robert Sheddan of Morrishill from Virginia to Ayrshire, Scotland. Sheddan wanted Montgomery apprenticed to a joiner so that he could learn a skill, and then be sold for a large profit in Virginia. Montgomery was baptised by Reverend John Witherspoon in Beith (who would go on to sign the American Declaration of Independence). Sheddan had Montgomery forcibly removed to Port Glasgow and placed him on a ship bound for Virginia, but on 21 April 1756 Montgomery escaped to Edinburgh. He was apprehended following newspaper advertisements about his escape, and was incarcerated in the Edinburgh Tolbooth.

Among the records relating to the case (NRS, CS234/S/3/12) are petitions of Montgomery (originally styled 'James Montgomery Sheddan, prisoner in the City Guard of Edinburgh') and by Robert Sheddan, and answers by each party to the other's petitions.

Sheddan also submitted the bill of sale from Joseph Hawkins, an individual who claimed people as his property, in Fredricksburg, to Robert Sheddan of 'One Negroe boy named Jamie' in 1750. An image of the bill and a transcript can be seen here. 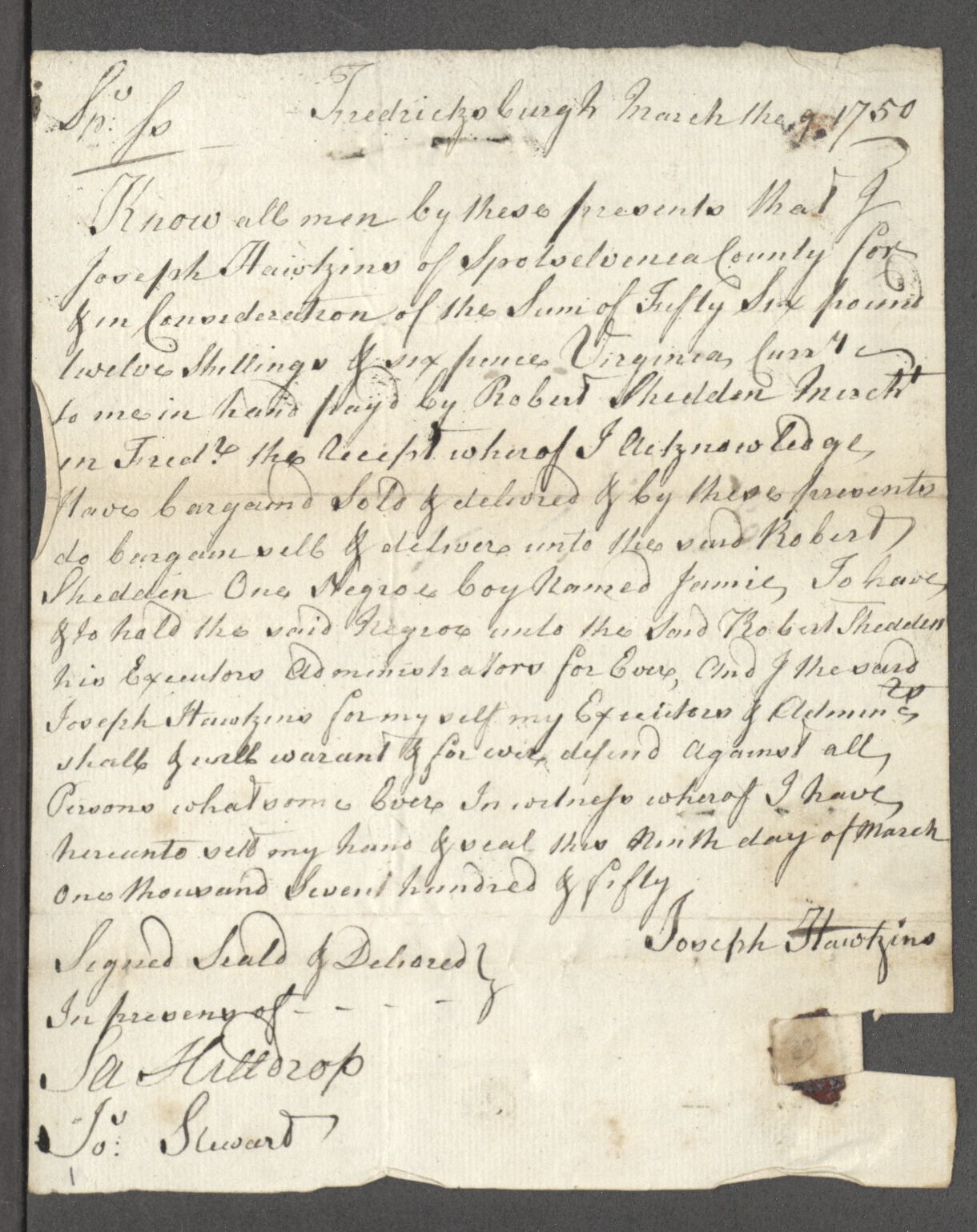 Know all men by these presents that I
Joseph Hawkins of Spotselvenia County for
& in Consideration of the Sum of Fifty Six pound
twelve shillings & six pence Virginia Curr[enc]y
to me in hand pay[e]d by Robert Shedden Merch[an]t
in Fred[ricksburgh] the Recept wherof I acknowledge
Have bargain[e]d Sold & deliv[e]red & by these presents
do bargain sell & deliver unto the said Robert
Shedden One Negroe Boy Named Jamie, To have
& to hold the said Negroe unto the said Robert Shedden
his Executors administrators for Ever, And I the said
Joseph Hawkins for my self my Executors & admin[istrato]rs
shall & will warant & forever defend against all
Persons whatsum Ever In witness wherof I have
herunto sett my hand & seal this Ninth day of March
One thousand seven hundred & fifty
Signed Seal[e]d & Deliv[e]red Joseph Hawkins
Ja[mes] Hilldrop
Jo[h]n Stewart"

In August 1756, Sheddan requested that the case be heard quickly because he was responsible for the cost of Montgomery's subsistence in the tolbooth, and because of concerns for the prisoner’s health. In December 1756 Montgomery's health had deteriorated and both parties were still attempting to obtain a hearing. By the time the Court of Session declared that the case would be heard on 4 January 1757, Montgomery had died in prison.

This was the first case brought before the courts, and was followed by two more in 1769 and 1778 respectively. However, it would be another 22 years before the law would finally pronounce on the legality of slavery in Scotland.

You can see the papers for the court case in the Historical Search Room at the NRS (NRS, CS234/19/3/13 and NRS, CS234/S/3/12). They can also be viewed on on Virtual Volumes via the NRS' ScotlandsPeople service.

Related features and resources on the NRS and SCAN websites

Read about the Dalrymple v Spens case of 1769, the Knight v Wedderburn case of 1778, and about George Dale, a native of Africa and formerly enslaved, whose life story was used as evidence by the Society for the Purpose of Effecting the Abolition of the African Slave Trade.