The history of George Dale, a native of Africa, 1790

The history of George Dale, a native of Africa, 1790

In August 1807 an act was passed abolishing the slave trade in the British empire. It was an important step in the abolition of slavery and in the suppression of the slave trade.

From government, court and private records in the National Records of Scotland (NRS), it is possible to describe the experiences of black people in Scotland from at least the early 1500s onwards. Until the mid-nineteenth century the surviving records provide little in the way of information about the majority of the inhabitants of Scotland, whatever their race. Occasionally an individual life is described more fully. One such case is the former enslaved, George Dale, who was transported against his will from Africa aged about eleven, and ended up in Scotland after an unusual career as a plantation cook and a crewman on a fighting ship.

At the time of the French Revolution in 1789 there was a move towards freedom and liberty for all people, and The Society for the Purpose of Effecting the Abolition of the African Slave Trade gathered evidence like George Dale's life story for the anti-slavery activism and abolitionist cause (NRS, GD50/235/2). 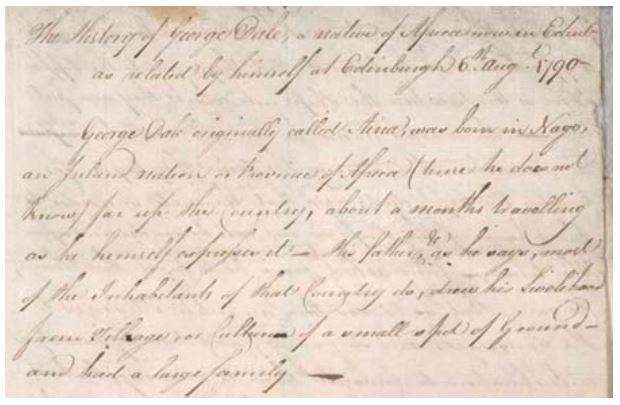 Related features on the NRS and SCAN websites

Read about how fugitives from slavery challenged the legal status of slavery in Scotland and attempted to gain their freedom in our features on Jamie Montgomery, David Spens and Joseph Knight.

If you are researching an aspect of slavery or the slave trade in Scottish archives consult our research guide on slavery and the transatlantic slave trade.

On the Scottish Archive Network (SCAN) website you can see an exhibition about Glasgow's role in the slave trade and steps towards its abolition.

The slave trade may have been abolished in the British Empire in 1807 and eventually prohibited by the 1948 Universal Declaration of Human Rights, but slavery still exists and millions of lives are affected by it. Modern slavery takes various forms and affects people of all ages, sex and race. If you would like to know more about slavery today and how to support campaigns against it, a good place to start is the Anti-Slavery website.