How the information should be collected

For deaths registered in Scotland after the start of 2012, the procedure described below should be followed.

When an informant (a person who goes to a Registration Office to register a death) arrives at the office, he/she should normally be given a laminated card to look at while waiting to be seen by the registrar. The purpose of the card is to prepare the informant for the questions that will be asked about the ethnicity of the deceased person. The wording on the card is as follows:

INFORMATION ON ETHNIC GROUP AT REGISTRATION OF DEATH

The Registrar General for Scotland wishes to record information about the ethnic group of the deceased person on whose death you are the qualified informant under section 23 of the Registration of Births, Deaths and Marriages (Scotland) Act 1965. This would be shared with the National Health Service and used in research into the links between ethnic group and causes of death to help improve health and healthcare services. Any published information would be in the form of numerical tables or figures from which no individual could be identified. The information will be used for no other purposes.

At the time of informing on the death you will be asked by the registrar whether you consent to the recording and sharing of the deceased person’s ethnic group as described above. Please indicate to the registrar that you give consent or do not give consent for this information to be recorded and shared. The registrar will then record your choice in the Form of Particulars relating to the death registration. None of this information, including your choice, will be shown in the register of deaths.

The giving of or not giving of consent as described above will not affect your duty as a qualified informant.

At the appropriate stage in the process of registering the death, the registrar should ask the informant the following question:

Are you willing to provide the Registrar General with information about the deceased person’s ethnic group?

This would be shared with the National Health Service, used in research into the links between ethnic group and causes of death to help improve health and healthcare services, and used to produce statistical tables and datasets. All published information would be in numerical form so that no individual could be identified. The information would be used for no other purposes.

However, if the informant does not agree to provide the information, the registrar should record either ‘not willing to provide’ or ‘ethnic group not known’ (whichever is appropriate).

The relevant screen of the registration computer system is laid out as follows: 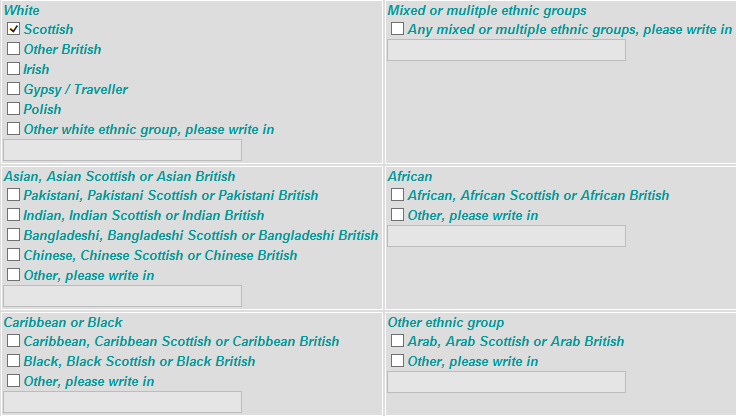 The information that was recorded is held in the registration computer system, and may be shared with the NHS, and used in research or to produce statistics.  However, it does not appear in the ‘death certificate’ (this is the Extract of the entry in the Register of Deaths).