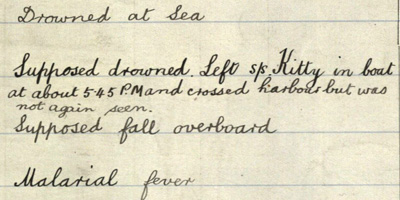 NRS has released thousands of marine death records online. A complete record of the deaths of Scottish seafarers from late Victorian times until 1974 is being made available online for the first time through ScotlandsPeople adding to the varied genealogical sources already available.

Among the 14,000 records, compiled by the Registrar General of Shipping and Seamen, are William M Murdoch, First Officer on RMS Titanic and the Scottish crew members who died when the Lusitania was torpedoed in 1915.

Also newly-released online are Returns of Deaths at Sea for the years 1902-1905. The Returns list Scottish seamen, fishermen who drowned and emigrating Scots who never reached their destination. Read some of their fascinating stories on the ScotlandsPeople website.

"Scotland is a maritime nation with fascinating stories and an important seafaring history and these new online registers will provide wider access to this heritage. I welcome the addition of this new resource that NRS is making available, which is part of the story of Scotland and will encourage people from across the world and at home to find out more about Scotland's seafaring heritage."

“The Returns of Deaths of Seamen and Deaths at Sea open a window into the lives of Scots seafarers in the first half of the twentieth century. They reveal the dangers experienced by seamen and passengers alike, and provide useful information for anyone wishing to discover more about their ancestors.  Our commitment at National Records of Scotland is to continue to extend digital access to the key records that researchers want.”