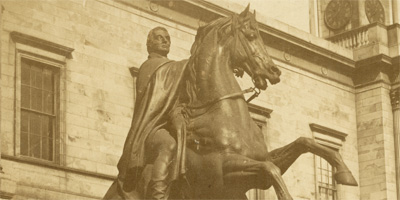 The equestrian statue of the Duke of Wellington outside General Register House in Edinburgh gives the National Records of Scotland a unique link with the British general and his most famous victory at Waterloo on 18 June 1815.

To commemorate the 200th anniversary of the Battle of Waterloo, two online features spotlight the iconic statue and some of the Scottish soldiers who fought in the conflict, revealing what became of some of the veterans. We also reveal some Waterloo-inspired names on the ScotlandsPeople website.

The battle involved thousands of Scottish troops in the British army’s epic fight, alongside other allied forces, against Napoleon’s superior army. More than 4,000 British soldiers died in or soon after the battle, but the survivors earned the right to wear the Waterloo medal, and enjoyed the status of heroes at home.

Exactly thirty-seven years later, many of the veterans were present at the ceremony to unveil the statue of Wellington outside General Register House. His defeat of Napoleon was regarded as ensuring the freedom not only of Britain but of Europe in general.