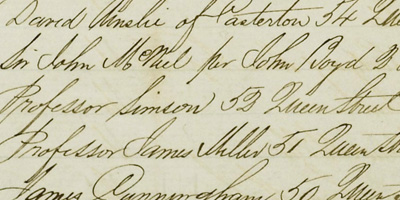 NRS has released valuation rolls from 1855 on ScotlandsPeople. The great, the good and the humble of Victorian Scotland can be found amongst the million plus names and addresses now available to researchers online.

Among the 1855 Valuation Rolls are many notable figures, including Professor James Young Simpson, Hugh Miller, David Octavius Hill, and Sir David Brewster. Humbler  people include the shoemaker father of the future missionary, Mary Slessor, and the landlady of the lodgings where Pierre Emile L’Angelier died, allegedly at the hand of Madeleine Smith, the Glasgow socialite who was notoriously tried for his murder in 1857.

The rolls also provide a snapshot of a country undergoing enormous change, as people left the land in search of work in the expanding industrial towns and cities, often living in cramped, unhealthy conditions, while others emigrated in search of a better life. Britain was also a country at war, and in Scotland, as elsewhere, streets and houses had already begun to be named after the Battle of Alma, in honour of the allies’ victory over the Russians in the Crimea in September 1854.

The Valuation Rolls were first compiled in 1855, the same year that the statutory registration of births, marriages and deaths was introduced under the supervision of the first Registrar General for Scotland. The resulting records provide a detailed picture of the people of Scotland eighteen years after Queen Victoria came to the throne.

The 1855 rolls join eight previous releases on the ScotlandsPeople  website, enabling anyone worldwide to find property owners, tenants and occupiers across Scotland for the 70 years between 1855 and 1925.

"I welcome the addition of the latest resource that NRS is making available to a wide audience. These -records tell part of the story of Scotland and allow people across the world and at home to learn more about the history of their families and communities."

“The Valuation Rolls started in 1855, the same year as the statutory registration of births, marriages and deaths was begun by my earliest predecessor as Registrar General. Together they provide a mass of information for family historians and other researchers to use in understanding the fabric of Scotland and Scottish society in this period. The latest release is part of the commitment by the National Records of Scotland to progressively improve access to the key records that researchers want.”