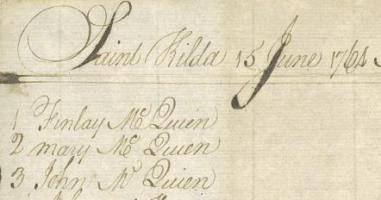 A 250-year-old census showing the earliest recorded population of the Island of St Kilda has been discovered thanks to work by the National Records of Scotland.

The document was discovered among the papers of the Maclachlan of Maclachlan family during cataloguing by the National Register of Archives for Scotland (NRAS), the branch of the National Records of Scotland which records historical papers held in private hands in Scotland.

It is not known exactly why the census was taken, or by whom, but it is likely it was made to contribute to a wider report on the Hebrides.

Until now, the oldest known record of the population dated from 1822. As the later document included ages, it is possible to track five residents of St Kilda who appeared on both censuses, 52 years apart. The 1764 census also includes the ancestors of the final five families to be evacuated from the island in 1930, the MacQueens, Fergusons, Gillies, MacDonalds and MacKinnons.

Dr Alison Rosie, Registrar of the National Register of Archives for Scotland, said:

“This document sheds new light on the history of St Kilda and the families who lived there, and gives us an insight into their lives more than 250 years ago.

“Through it we can trace individuals back fifty years earlier than the next surviving census, and many of the people listed were the ancestors of the families who left the island in 1930.

“One of the most fascinating aspects of working for the National Register of Archives for Scotland, which celebrates its 70th birthday this year, is the potential for discovering new and exciting documents like this, often in unexpected places, and then drawing them to the attention of historians and the public.”

“The document was found as part of  a hoard of papers - around 13 large boxes. When I heard from Charlie Maclachlan of Maclachlan the younger that they had been found I asked to see some of them and the first document I pulled out dated from 1590.  I realised the time had come to call in the professionals.

“The team from NRAS had the papers spread out all over the dining room of Castle Lachlan – which is not a small room – and went through them, gasping a bit, before explaining that they would need more than an afternoon to evaluate them, boxing them back up and taking them away. A year and  half’s studyproduced a 79 page catalogue of everything we have.

“There’s some very interesting material about Clan Maclachlan history in there, of which this St Kilda document is just one part.”

Click on the above image to view a higher quality image (image - Courtesy of the Lachlan Trust).

You can read more about the history of St Kilda on this website, and on our ScotlandsPeople website.