The Soldier and the Actress: Birth, Death and Marriage Records Released Today

The Soldier and the Actress: Birth, Death and Marriage Records Released Today 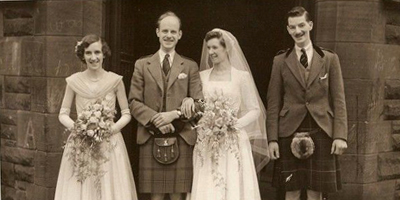 The annual release of births, deaths and marriages by the National Records of Scotland today includes the marriage record of Captain Bruce Seton, a dashing actor-turned-soldier who married his actress wife an hour after being divorced in a Scottish court on St Valentine’s Day 1940.

Seton’s marriage was one of 53,597 that took place in Scotland in 1940, and that are all being made available online through the official website ScotlandsPeople.

Every year on 1 January new data collected by the Registrar General for Scotland becomes available to the public online via the ScotlandsPeople website. The records can also be searched at the ScotlandsPeople Centre in Edinburgh and at local family history centres in Glasgow, Kilmarnock, Alloa, Hawick and Inverness. The statutory registers are opened to the public in line with the falling away of specific closure periods: 100 years for birth records, 75 years for marriage records and 50 years for death records.

“I am pleased that we’ve been able to add a further almost quarter of a million records of  the of births, deaths and marriages to the already substantial information available on ScotlandsPeople.  This year’s release, which includes civil marriages from 1940, the first time they were performed by registrars in Scottish register offices, is an interesting reflection of a changing Scottish society at that time – and an opportune moment, too, to celebrate the important work of registrars across Scotland over many decades.”