Our latest surgery event took place at the magnificent City Chambers in Glasgow (many thanks to Glasgow Life for providing this) on 21 September. It focused on what authorities need to do to achieve compliance when developing their Records Management Plans (RMPs). This was well attended by records and information management colleagues from a range of public authorities and featured a presentation from Dunbartonshire and Argyll & Bute Valuation Joint Board on their experiences (both good and bad) of going through the process of submitting a RMP. NRS Client management colleagues also delivered the message of what authorities should be considering when planning to archive records selected for permanent preservation. 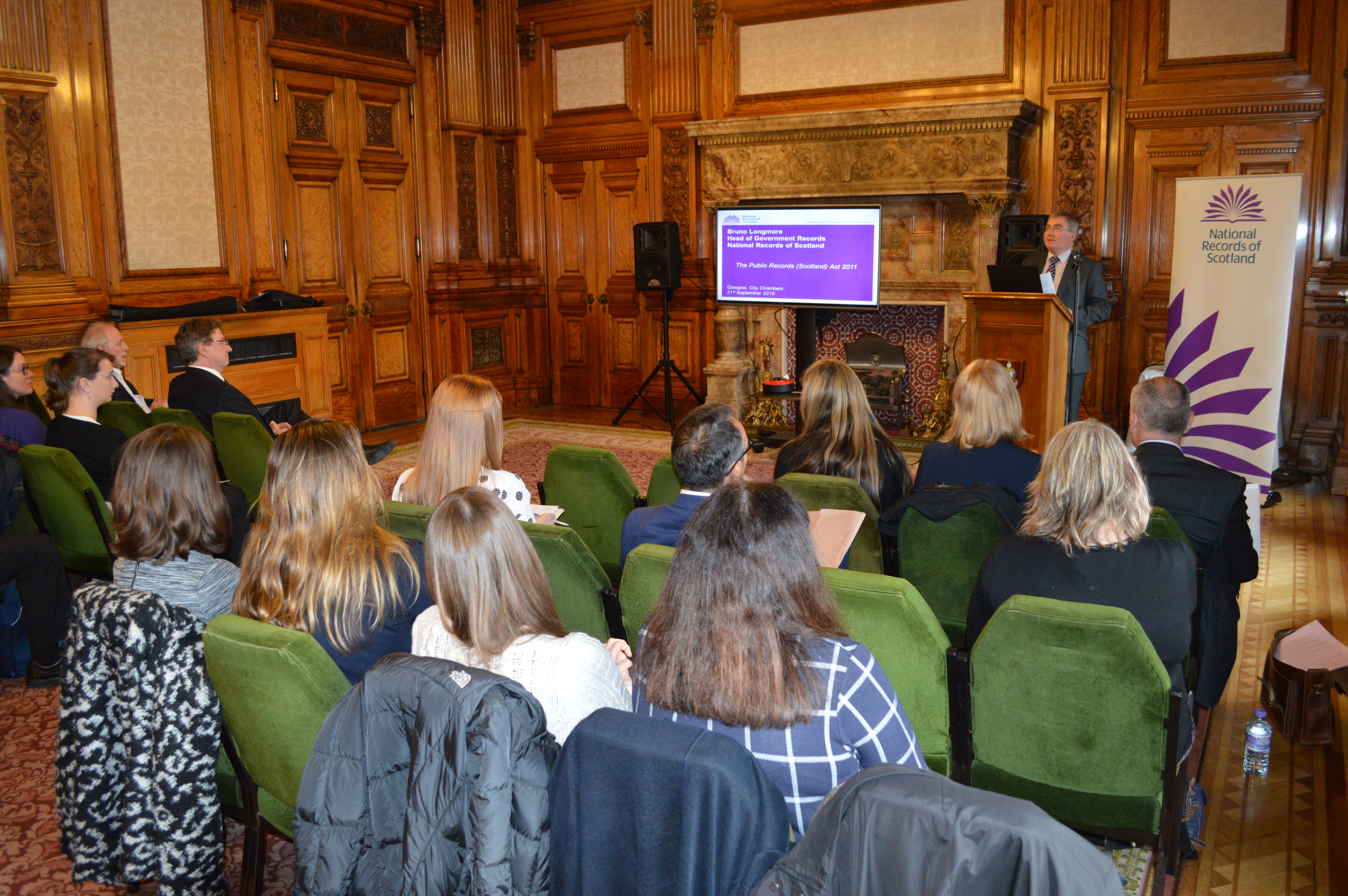 The Assessment Team have also recently added a new resource to the Resources area of the Public Records (Scotland) Act 2011 section of the NRS website. It is a list of public authorities who have published their agreed RMPs and also a link to the websites where these have been published. This provides those authorities with agreed RMPs an opportunity to share their knowledge with colleagues across the public sector as well as publicising their records management provisions to their stakeholders.

Response from the Keeper of the Records of Scotland to the public consultation on his proposed Supplementary Guidance on Proper Arrangements for Archiving Public Records.

The Public Records (Scotland) Act, 2011 requires public authorities to have ‘Proper Arrangements’ in place when transferring their records selected for permanent preservation to an archive. These cover issues of constitution, finance, staffing, security, storage, collection care, and public access.

These arrangements are to be defined by the Keeper and a first draft of his guidance on them was put out to public consultation on 18 December 2015. The consultation was conducted through the Scottish Government’s Citizen Space site and ran until 14 March 2016. The aim was to gather views from stakeholders and the general public as to the appropriateness of the proposed arrangements and to identify any errors and omissions.

There were 35 responses to the consultation. The overwhelming majority were in favour of the arrangements proposed but there were several alterations and improvements suggested. These responses have been analysed and the National Records of Scotland has now issued a report, published here, summarising the findings and setting out the Keeper’s response to the issues raised. The report is also published on the Citizen Space website. The final Guidance on Proper Arrangements will be published later this month.

In April 2016, National Records of Scotland and the University of Edinburgh’s School of Law held a workshop ‘From a culture of caution to a culture of confidence: lessons learned from implementing the Public Records (Scotland) Act 2011’ at the Administrative Data Research Centre Scotland (‘ADRC-S’). The workshop was based on the proposition that good records management and information governance is critical to the delivery of good public services. It provided a forum for discussion between key stakeholders to consider the wider benefits of using public sector data and to connect the work of records managers to each public authority’s commitment to the public and their service users. Participants included Scottish public authorities tasked with implementing the Public Records (Scotland) Act 2011 as well as other stakeholders involved and interested in the sharing and governance of public sector data.

A summary of the key discussion points from the workshop are in the Workshop Report (PDF 7.5MB).

This is a long-overdue catch up article to cover what has been happening the last few months.

In September and October 2015 we held another series of our popular ‘Surgery’ events in Edinburgh and Perth. These outline the background of the Public Records (Scotland) Act 2011 and what public authorities need to consider when creating a Records Management Plan (RMP). We also heard presentations from Midlothian Council and Perth and Kinross Council relating their practical experiences (good and bad!) of developing and implementing a RMP.

In September 2015 the latest Public Records (Scotland) Act 2011 Annual Report was laid before Parliament. This was the third such report which is used to inform Scottish Ministers about the Keeper’s progress on implementing the Act. The 2015 Annual Report, and reports from previous years, can be viewed at: http://www.nrscotland.gov.uk/record-keeping/public-records-scotland-act-2011

On 16 November 2015 the Assessment Team hosted an event for representatives of public authorities. This event was intended to give authorities a chance to provide feedback on the assessment process. A lot of useful suggestions came out of the event including a desire from authorities for creating a way of providing the Assessment Team with updates on improvements and changes to their RMPs. This is something the Team is keen to take forward.

On 1 December 2015 the Keeper held a second Electronic Records Seminar at New Register House. The morning session of this event saw presentations from a number of colleagues in public authorities about the different systems they use for managing electronic records. The afternoon session saw sessions on how to engage staff and senior management in records management as well as some of the requirements and issues around the archiving of electronic records. Around 60 colleagues from a wide range of public authorities attended the event. The original event in May 2015 was so over-subscribed that it was necessary to hold this second event.

In February 2016, the 100th authority to have their RMP agreed was East Dunbartonshire Licensing Board. The Assessment Team is on track to have assessed the RMPs of the c. 250 originally scheduled public authorities by March 2018.

The second Public Records (Scotland) Act 2011 Conference took place on 24 February 2016 at Glasgow’s City Halls. The first conference in December 2013 was focused on encouraging buy-in from senior managers and the second provided an update on the progress made so far and re-emphasised the need for continuous improvement in records management systems. The Conference was supported by the Scottish Council on Archives (SCA), Archives and Records Association (ARA), Information and Records Management Society (IRMS), Archivists of Scottish Local Authorities Working Group (ASLAWG) and Glasgow Life.

In March 2016 the Assessment Team facilitated a round table discussion for a small group of Local Authority records managers to discuss common issues faced by them.

In between these formal events the Assessment Team has continued to engage with individual authorities about developing and implementing their RMPs. This has proved to be an effective way of ensuring that authorities are aware of their responsibilities under the Public Records (Scotland) Act 2011 and for building good working relationships with authorities