Tuesday 3 December 2013 saw the first post-implementation conference about the Public Records (Scotland) Act 2011 (PRSA) take place at the City Halls in Glasgow. The event was supported by NRS, The Scottish Council on Archives, The Information and Records Management Society, Archivists of Scottish Local Authorities Working Group, and The Archives and Records Association. The conference was introduced by the Minister for External Affairs and International Development, Mr Humza Yousaf MSP. A wide range of speakers gave interesting and thought-provoking talks on the impact of PRSA and its relationship with other legislation governing records and information. Speakers included Tim Ellis, Chief Executive of NRS, in his role as Keeper of the Records of Scotland, Ken Macdonald, Assistant Information Commissioner for Scotland & Northern Ireland, and Rosemary Agnew, Scottish Information Commissioner. A live Twitter feed was maintained throughout the day. The PRSA Assessment Team would like to thank everyone who attended and those who worked so hard to made the conference such a success, particularly Ben Bennett and Victoria Brown of the Scottish Council on Archives.

Feedback is currently being gathered from delegates and a summary account of delegates comments will be published to these pages in due course. The conference was filmed and this will be available to view on the Scottish Council on Archives website soon.

There are currently (2nd December) eight plans under review by the Keeper Assessment Team.

The Keeper's first Annual Report on the Public Records (Scotland) Act 2011 has now been published and laid before Parliament.

The report shows that the first scheduled authorities have been invited to submit their Records Management Plans and several have now done so and had them agreed. This is the start of a long-term process of improving the standard of record-keeping across the Scottish public sector. This will be achieved through continuous engagement with the Keeper's assessment team and between authorities themselves. The initial signs have been promising as authorities work towards meeting their obligations under the new legislation. 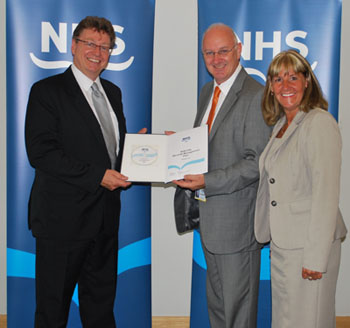 Fife NHS Board received the Keeper's agreement to their records management plan at the end of September 2013.

NHS Fife has published their RMP. Vitally, this publication provides links to their large evidence package and in doing so they have created a valuable resource for other NHS boards and for the Scottish public sector as a whole.

At the same time we have been made aware that Falkirk Council has also published the plan which was agreed by the Keeper in August.

15 August 2013
West Lothian Council have published their formal records management plan, the first to be agreed after that of the Keeper and the Court of Lord Lyon.

Hopefully this publication will provide a useful resource for other similar organisations. It can be found at the West Lothian Council website.

The Keeper's report on the West Lothian plan can be downloaded in our Assessment Report section.

Each month we check the links in the Keeper's Guidance to the Form and Content of the Model Records Management Plan and where possible update them. The date of the latest check is advertised at the bottom of each page.

Since May the Keeper's assessment team has been receiving submissions from Scottish public authorities, once these have (hopefully) been agreed by the Keeper, the opportunity arises to offer policy documents, and other documents submitted as evidence, as guidance for authorities further down the timetable. However, we will only do this with the express permission of the submitting authority.

In addition, the Keeper will recommend that authorities publish agreed RMPs on their own website. When we become aware that this has been done we will provide a link from the Guidance document to the published plan.

It is our intention to advertise additions to the Guidance document in a semi-regular post to this page.

Assessment reports on these RMPs appear on the new Assessment Report Webpage. The Keeper intends to publish a report on each of the submitted public authority records management plans and indicate his agreement or otherwise. At the same time, he will recommend that the authorities publish their RMPs, although publication is not a requirement of the Public Records (Scotland) Act.

The first RMPs from outside the Register House campus have now been submitted. These are from West Lothian Council (including West Lothian Licensing Board) and from the Scottish Legal Aid Board. These plans are being considered at the moment and the Keeper's reports on these plans will be published soon. 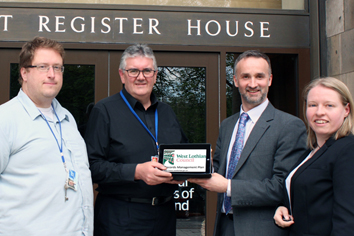 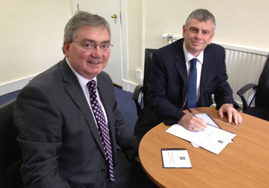 The Keeper looks forward to receiving RMPs from the other timetabled authorities as the year progresses.

During April 2013, a series of three surgeries were run by the Public Records (Scotland) Act implementation team. Surgeries took place in Edinburgh, Aberdeen and Glasgow. These were open to any representatives of named Scottish public authorities and were very well attended by a range of professionals from across a variety of sectors.

The surgeries consisted of presentations from the implementation team about the background to the Act and the 14 elements of the Keeper's Model Plan. These were then followed by an 'open forum' style discussion which allowed comments and questions about any aspect of the Act and its implementation. These explored, and hopefully addressed, delegates' concerns about the practical implications of the Act on their authorities. Each surgery raised a variety of issues and, in turn, discussion between delegates to find solutions common to and across different sectors. As well as giving delegates an opportunity to find their own solutions to issues they face, the surgeries provided the implementation team with a valuable opportunity to engage with representatives of the public sector and learn about some of the issues they face.

The implementation team has now considered all of the issues raised at the surgeries and we are now publishing a FAQ document which will hopefully address some of the more commonly asked questions.

For those not able to attend the recent surgeries, a copy of the presentation is available for you to consult.

Due to the popularity of these events and the positive feedback received by delegates who attended the surgeries, we intend to continue to run these events, with the next series taking place in Autumn 2013.

Should you wish to attend one of these events, please contact the implementation team at [email protected].

This prestigious UK award was collected by two of the four team members (Bruno Longmore and Pete Wadley) at the IRMS annual conference in Brighton on 20 May 2013. The other members of the award winning team are Hugh Hagan and Andrea Wells. It is one of only four awards given out annually by the IRMS which is the foremost professional association for those who work in or are concerned with records or information management in the UK.

In April 2013 the first records management plan from a named public authority was submitted under the Public Records (Scotland) Act 2011. In January 2013 the named authorities of the Keeper of the Records of Scotland and the Registrar General for Scotland, operating jointly under the umbrella of the National Records of Scotland (NRS), were invited under The Public Records (Scotland) Act 2011 to submit their records management plan by the end of April 2013. The plan was handed over early on 12 April 2013 by John Simmons, acting NRS Records Manager, and will now be assessed by the PRSA Implementation Team along with the accompanying evidence. NRS is the first public authority to submit a records management plan for assessment under the new Act, which came into force on 1 January 2013. Following assessment by the Implementation Team, and (hopefully) agreement, the plan will be published on our website as a guide to other authorities. If the plan is returned, further work will be needed to ensure that the plan complies with the requirements of the Act.

The submission timetable for the first six months of implementation (Jan – Jul 2013) has now been published on the NRS website at our Assessment Process page.

This timetable will be updated each month. There will, of course, be a period of several months between invitation and submission when the Keeper's implementation team will be available to engage with public authorities to help them in their task of creating a robust records management plan. The pre-submission period is flexible and will vary depending on the size and complexity of the organisation.

This new webpage also explains the assessment process more fully and provides links to the PRSA FAQ document and also to a list of all the public authorities to which the Act applies. This list will also be updated monthly to show those authorities who have been invited and to indicate when plans have been agreed. The list will also record any 'new' authorities appearing on the Scottish public sector landscape and that are subject to the Act.

This update is to inform all those interested that the Records and Information Management Scotland on-line forum launched last week through the Knowledge Hub, operated by the Improvement Service.

Throughout the various pre-implementation meetings we held, including the Keeper's Stakeholder Forum and the PRSA Surgeries, there was a clear message that records management practitioners wanted a way of keeping in touch beyond implementation of the Act on 1 January 2013.

This forum would seem an ideal method to do this. Although not facilitated by the National Records of Scotland, we support the forum and will participate in its debates and discussions. We will watch with interest the themes that develop. The forum will allow records managers to share their experiences of implementing the Public Records (Scotland) Act 2011 as well as much more.

The Hogmanay bells not only celebrated the New Year but the coming into force of The Public Records (Scotland) Act 2011 (the Act) from January 1st 2013. From that date, the Keeper has the authority to invite Scottish public authorities scheduled under the Act to submit their records management plans for agreement. As has been well publicised, the joint plan of the Keeper of the Records of Scotland (Keeper) and the Registrar General (the National Records of Scotland plan) will be first and the invitation to submit will be sent out in the next week. Following review, and (hopefully) agreement, it will be published on our website as a guide to others.

Invitations to submit over 250 other plans will follow in the next 5 years and in each case the Keeper will encourage the public authority to publish its agreed plan.

This week the Keeper is writing to the Chief Executives of all the scheduled authorities to remind them of their obligations under the Act. The letter will include a new information leaflet about the Act that we have produced in hard copy. This leaflet also appears as a PDF document on our website: please feel free to print it off and distribute to whom you think appropriate.