The Assessment Team have set up a Public Records (Scotland) Act 2011 (PRSA) discussion group on the Knowledge Hub. The Knowledge Hub is a network which allows colleagues in the public sector to communicate with each other and is hosted by the Improvement Service for Scotland. The intention of creating the PRSA discussion group is to allow records management colleagues to share knowledge and ideas and is also a useful tool for the Assessment Team to collaborate with and disseminate information and news to key contacts in public authorities. The Group was created in response to requests from colleagues to provide such a space. The Assessment Team will aim to regularly monitor the group but wishes to encourage members to proactively engage with each other in the space.

Any queries about joining the discussion group can be sent to the Assessment Team .

The Keeper’s Annual Report for 2018 on the Public Records (Scotland) Act 2011  has now been published and laid before Parliament.

The report shows that all of the authorities who were on the original schedule to the Act have now been invited to submit their Records Management Plans (RMPs). The vast majority of authorities on that schedule have now done so and had them agreed by the Keeper.

The Keeper’s Assessment Team continues to engage with authorities who have agreed RMPs through the Progress Update Review (PUR) mechanism to ensure that records management provisions are kept up-to-date. The Assessment Team also actively engages with authorities who have been added to the schedule since the Act came into force in 2013. These include authorities such as Food Standards Scotland and the Integration Joint Boards created under the Public Bodies (Joint Working) (Scotland) Act 2014 to provide integrated health and social care.

This is the end of the first phase of a long-term process of improving the standard of record-keeping across the Scottish public sector. The Report shows that signs are positive and that encouraging progress is being made.

The Public Records (Scotland) Act 2011 (the Act) has been in operation for 5 years. The Keeper of the Records of Scotland (the Keeper) considers it is therefore time to review the Model Plan and the Guidance Document published to help public authorities comply with the Act.

It is the Keeper’s intention to bring together a new Stakeholder Forum consisting of information specialists invited from various sectors to conduct the necessary review work. Drawing on their expertise, and on the Public Records (Scotland) Act (PRSA) assessment team’s experience of the implementation of the 2011 Act over the last 5 years, the Forum will assist the Keeper to update the Model Plan.

The Forum will look at all elements and aspects of the current Model Plan, but it will also be asked to consider two further aspects of wider record-keeping under the Act:

It is proposed that the Forum will meet for the first time on 25 July in the National Records of Scotland. There will be two further meetings which will take place in August and September. The Keeper will submit the proposed new Model Plan for public consultation in the autumn. The Keeper will then consider all consultation responses and aim to publish a final version of the revised Model Plan in the spring of 2019.

We are very keen to ensure that the Forum enjoys the widest possible representation, but that it also remains manageable. Membership will therefore be drawn from a number of authorities chosen to represent individual sectors. Particular authorities will soon be contacted and invited to take part.

While the Forum will meet to consider its work, the bulk of its work will be undertaken by e-mail communication. Reviewing the model plan remotely will minimise the resource commitment for invited participants and therefore should not prove to be too onerous. Minutes of the meetings and news of any significant developments will be published to the PRSA area of this website. All colleagues will be informed of these postings.

All colleagues not invited to participate in person in the Forum meetings are encouraged to take part remotely. The assessment team will collate any comments and submissions received by email or over the phone and present these to Forum members for inclusion in their deliberations ([email protected] / 0131 535 1418). Minutes will be compiled of the Forum meetings so all colleagues are informed of the discussion. Ultimately, as indicated above, the new model plan will be subject to a formal Scottish Government public consultation.

The Keeper of the Records of Scotland’s (the Keeper’s) Public Records (Scotland) Act 2011 (PRSA) Assessment Team recently received the first voluntary resubmission of a Records Management Plan (RMP) covering Dumfries and Galloway Council, Licensing Board, and SWestrans. This is what is known as a ‘common’ RMP covering several authorities.

It is essential that records management systems, policies and procedures are regularly reviewed and updated to ensure that they remain fit for purpose. The Act specifies that the Keeper cannot revisit an authority’s agreed RMP for five years after agreement. Five years is a long time in the fast-moving world of records management but Section 5(6) of the Act allows authorities to revise its RMP and submit this to the Keeper for agreement at any time. Additionally, the Assessment Team has developed the Progress Update Review (PUR) mechanism which is a voluntary system that allows authorities to report progress to the Assessment Team. More information about the PUR can be found on this website. 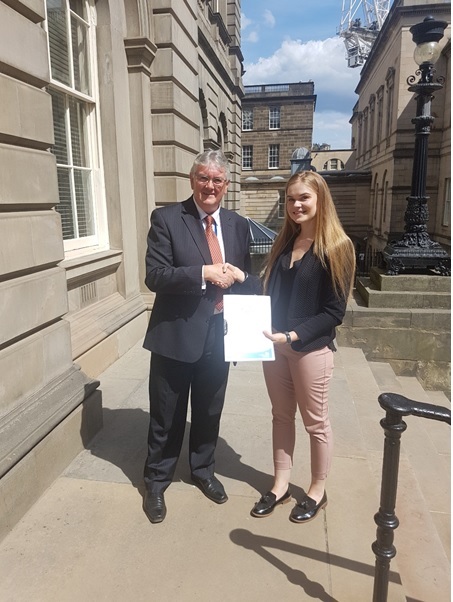 It is now five years since the Public Records (Scotland) Act 2011 (the Act) came into force on 1 January 2013 and we are also approaching five years since the first Records Management Plans (RMPs) were agreed by the Keeper. Under Section 5(2) of the Act the Keeper cannot revisit a public authority’s RMP for five years after it has been agreed. Section 5(1)(a) of the Act states that RMPs must be regularly reviewed to ensure that they continue to meet the needs of public authorities.

In order to bridge that five year gap we developed and rolled out the Progress Update Review (PUR) mechanism last year. This is designed to provide an informal ‘health-check’ and as a way of tracking the progress of improvement actions being undertaken within authorities. Articles from 2017 relating to the PUR mechanism are available on this website.

As PUR is voluntary, the Keeper still requires some way of being able to check on the state-of-play of public authorities’ records management arrangements. As well as continuing to assess progress through the PUR system, the Keeper will shortly start inviting authorities to formally re-submit their RMPs and supporting evidence to be reviewed by the Assessment Team. Information on the process, as well as the invitation timetable are also available on this website.

In order to make things easier for authorities this will follow the same process as the original assessments. Authorities will be warned that they will be invited to re-submit their RMPs. Six months later, invitations will be sent to Chief Executives and authorities will then have a further four months to submit their RMPs. These will then be assessed and an Interim Report sent to key contacts within authorities who will then have an opportunity to respond to the findings of the Assessment Team. A final report will then be produced and sent to the Chief Executives as well as being published on this page of the website. 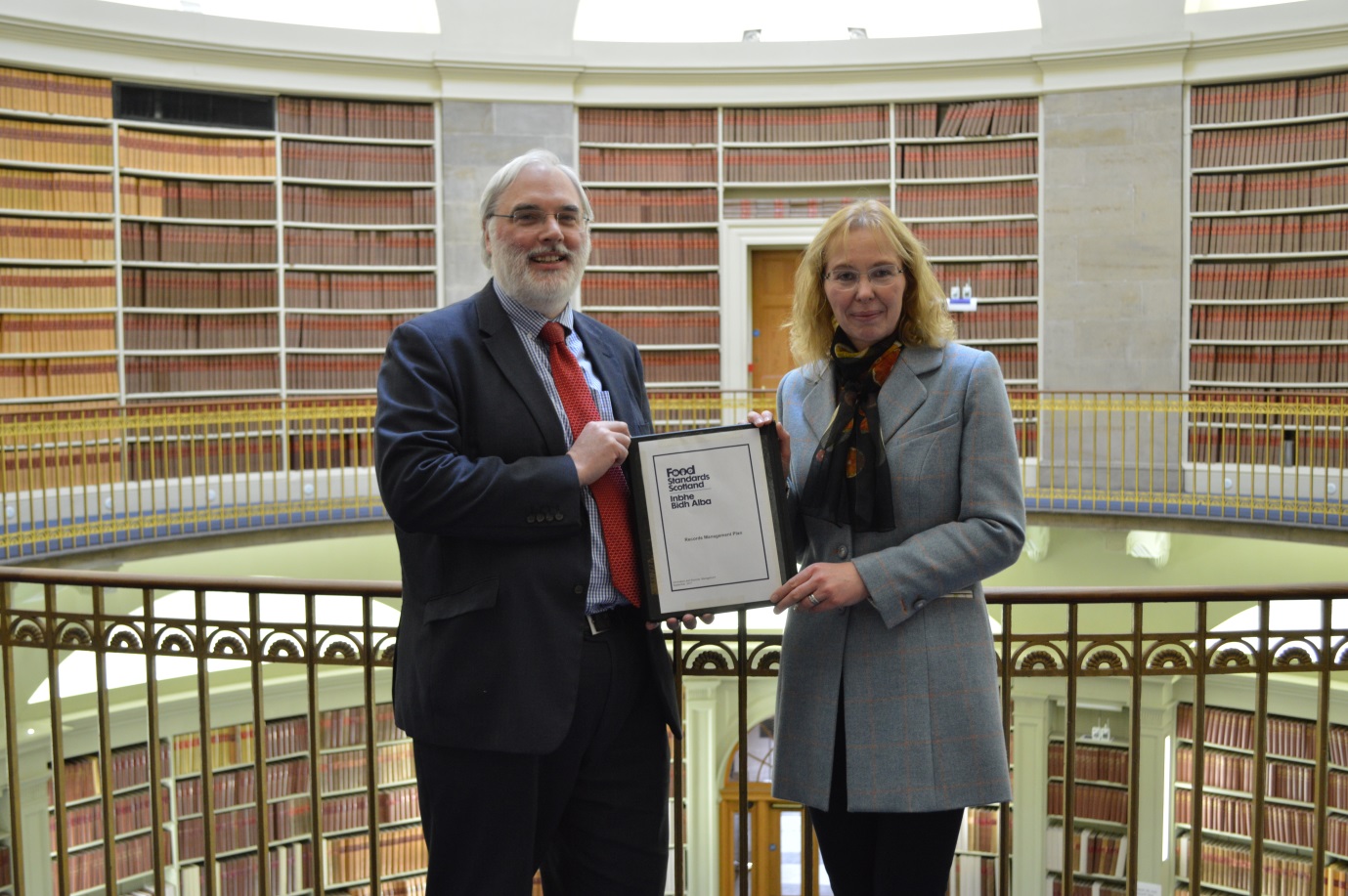 Last week, the Keeper of the Records of Scotland (the Keeper) agreed the Records Management Plan (RMP) of Food Standards Scotland. This is the 207th RMP to be agreed by the Keeper, but more significantly, it is the first RMP agreed for an authority which didn’t appear on the original Schedule of the Public Records (Scotland) Act 2011 (the Act). The Act came into force on 1 January 2013 and requires public authorities listed on the Schedule to create a RMP detailing the records management arrangements within those authorities.

“Food Standards Scotland is pleased that the Keeper of the Records of Scotland has agreed our RMP. It was a real team effort within the organisation in developing the RMP, which demonstrates we have the necessary arrangements in place to efficiently manage information and records. As a relatively new organisation, we’re delighted to have achieved this. We’re committed to ensuring everyone plays their part in carrying out the plan across the organisation”.