The plant we know as the Scotch thistle, Onopordum acanthium, is not native. It was most likely introduced from Europe pre-16th century and has now naturalised in many areas. Chosen by Sir Walter Scott (1771-1832) as the emblem for George IV's visit to Scotland in 1822, it has been accepted as a national emblem. The most likely candidate for the true Scotch thistle is the native spear thistle Cirsium vulgare - abundant in Scotland and very similar to the depictions on early Scottish coins.

The plant has many heraldic connections and is associated with the Order of the Thistle which in the 17th century adopted the wonderful motto, Nemo me impune lacessit (nobody attacks me with impunity) no doubt in reference to the spines.

This ancient order may date to Emperor Charlemagne in the 9th century or, as some suggest, Scotland's James III (1488-1513).

Mary Queen of Scots (1542-1587) had the thistle's image incorporated into the Great Seal of Scotland, making it a national symbol for longevity.

Perhaps the most famous poem about this plant is by Hugh MacDiarmid. Christopher Murray Grieve (1892-1978) who in his masterpiece 'A Drunk Man Looks at a Thistle' (1926) writes the following wonderful lines:

The following words from the same work are engraved on MacDiarmid's gravestone in Langholm:

"I ha'nae hauf-way hoose, bu aye be whaur / Extremes meet - it is the only way I ken
To dodge the curst conceit o' bein' richt / Tha Dams the vast majority o' men."

Another famous Scot who wrote about its merits was James Scott Skinner (1843-1927) 'the Strathspey King', a traditional fiddler. Born in Banchory, Skinner performed extensively in Britain and America, composing over 600 tunes. Time permitting, he was also a keen gardener. After witnessing his gardener friend Dee Morrison's magnificent thistle display he declared: 'I will compose a tune with the title Dee Morrison's Seven Thistles'. The march is still played on radio and at ceilidhs. 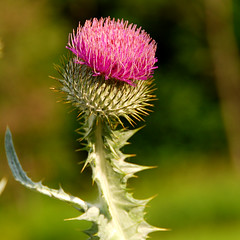 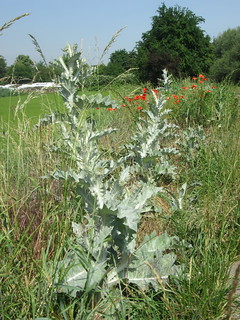