Walter Scott was born in Edinburgh on 15 August 1771, the son of Walter Scott and Anne Rutherford. He studied in Edinburgh and Kelso before being admitted as an advocate in 1792. He married Margaret Charlotte Carpenter at Carlisle on 24 December 1797. In 1799 he was appointed sheriff-depute of the county of Selkirk and from 1806 became principal clerk to the Court of Session. During these years he collected ballads which were published in 'Minstelry of the Scottish Border' in 1802; edited historical documents and literary texts; and wrote poetry including 'The Lay of the Last Minstrel' and 'Marmion'. From 1814 he turned to historical fiction. This work, known as the 'Waverley novels', includes 'Ivanhoe', ' Rob Roy', 'Kenilworth', 'The Heart of Midlothian' and 'The Bride of Lammermoor'. His home at Abbotsford near Melrose is open to the public.

Our blog article 250 Years On: Sir Walter Scott and Register House was published on 15 August 2021 to mark the 250th anniversary of his birth. Sir Walter Scott is also one of the famous Scots commemorated in our Archivists' Garden. The entry on Scotch thistle refers to his use of it as an emblem for King George IV's visit to Scotland.

Sir Walter Scott died at Abbotsford on 21 September 1832 aged 61 years and was interred in the family burial ground at Dryburgh Abbey. The entry in the Old Parish Register (OPR) for Melrose includes this elegy:

'This Great, this Good, this nobly Gifted Mind,
To dust its mortal part has now resigned;
The ethereal spark now wings its flight on high,
To mix with kindred spirits in the sky.
Fair Scotia mourns, the rich and poor deplore
that he, the child of genius, is no more!
Weep, classic Tweed! Pour out your floods of woe,
Your great Magician's dead! A man who never made a foe!' 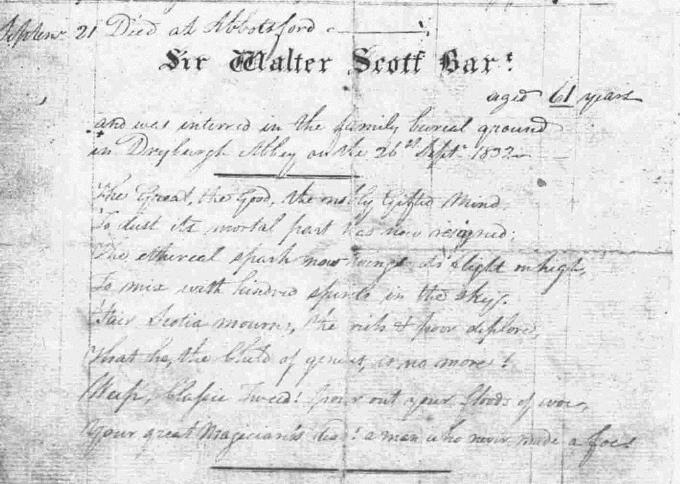 A second entry in the Old Parish Register for Mertoun records that he was interred at Dryburgh on 26 September 1832.