Hugh MacDiarmid is the pseudonym of Christopher Murray Grieve. He developed his love of reading through the public library in Langholm. After further studies in Edinburgh he started work as a journalist. He served on the Eastern Front and in France during the First World War before resuming his writing career. He wrote poems in Scots, produced periodicals, anthologies, satirical essays (with Lewis Grassick Gibbon), biographical sketches and an autobiography. The long poem, 'A Drunk Man Looks at the Thistle' (1926) is regarded as his masterpiece. In 1934 he married Valda Trevlyn in London and then settled in Shetland. After the Second World War they set up home in a farm cottage near Biggar. He travelled widely and received many honours. Today Brownsbank Cottage is run by a charity which promotes his poetry. The Hugh MacDiarmid Papers, which include his manuscripts and letters, are held by the University of Edinburgh. The Hugh MacDiarmid page on the Scottish Poetry Library website includes some of the poems and a selected bibliography.

Hugh MacDiarmid is one of the famous Scots commemorated in our Archivists' Garden. The entry on the Scotch Thistle refers to the famous poem and the lines from it that are quoted on his gravestone.

Christopher Murray Grieve was born at 9:30 am on 11 August 1892, the son of James Grieve, postman, and Elizabeth Graham. The entry in the statutory register of births for the parish of Langholm in the county of Dumfries gives the place of birth as Arkinholm Terrace.

In 1901, Christopher M Grieve, 8, scholar, was enumerated at Parliament Square Library Buildings with his parents and brother. The census return for Langholm gives his father's occupation as rural letter carrier.

In 1911 Christopher Grieve, 18, reporter on the 'Edinburgh Evening Despatch', was enumerated at 39 Marchmont Road in Edinburgh. The census return for the district of Morningside shows that he was the head of household. The other occupant was his brother, Andrew Grieve, who was working as a boy clerk in the Civil Service.

In 1915 Christopher N Grieve, Reporter, was recorded at Halfpennyburn in Gowanbank. The valuation roll for the parish of Forfar in the county of Forfar (now Angus) shows that he was the occupier and tenant of a house and garden there. The incorrect initial for his middle name (N instead of M) is clear in the record and is reflected in the index entry.

Christopher Murray Grieve, 25, journalist and Sergeant in the Royal Army Medical Corps, married Margaret C J Skinner on 13 June 1918. The entry in the statutory register of marriages for the district of Morningside in Edinburgh gives the place of marriage as 3 East Castle Road after publication of banns according to the forms of the United Free Church of Scotland. His usual residence is given as Whittingehame, Prestonkirk, (Blackpool). Margaret was a typist for the Women's Voluntary Army Corps.

In 1925 Christopher M Grieve was recorded as a tenant and occupier of 16 Links Avenue in Montrose. The valuation roll for the burgh gives his occupation as journalist.

The 1918 marriage entry has a cross-reference to the Register of Corrected Entries (RCE) in the left-hand margin. This was how divorces were recorded prior to the introduction of the Statutory Register of Divorces in 1984.

The RCE entry on page 94 of volume 6. A decree of divorce was pronounced by Lord Pitman on 16 January 1932. It was the result of an action brought by Margaret. He was living at 64 Chancery Lane in London at the time. 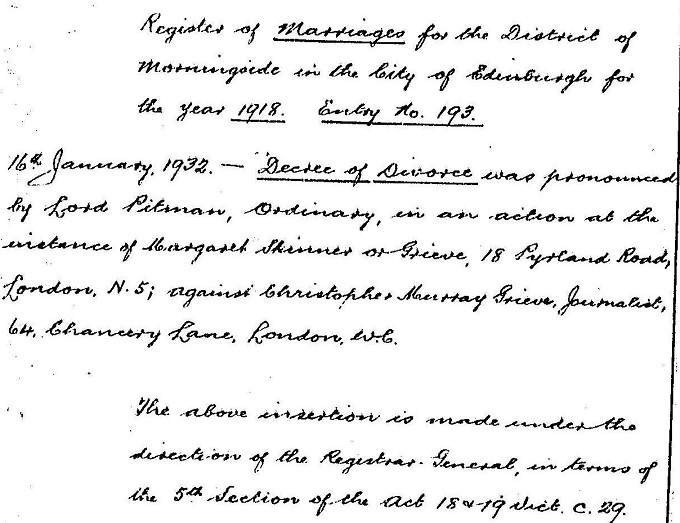 In 1940 Christopher M Grieves was recorded at Soddam and The Bothies, Hillhead, Symbister, in the Shetland Isles. The valuation roll for the parish of Whalsay and Skerries in the county of Zetland gives his occupation as author. The mis-spelling of his surname is clear in the record (Grieves instead of Grieve) and this is reflected in the index entry.

Christopher Murray Grieve died on 9 September 1978. The entry in the statutory register of deaths for the district of George Square in Edinburgh gives his age at death as 86 years. (National Records of Scotland, 1978/738/768)