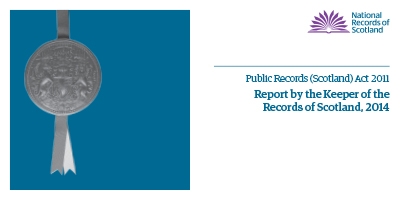 The Keeper’s second Annual Report on the Public Records (Scotland) Act 2011 has now been laid before the Scottish Parliament and published.

It can be viewed on the National Records of Scotland (NAS) website.

The report shows that 67 scheduled public authorities have been invited to submit their records management plans and many had them agreed in 2013/14. The Act is central to a long-term process of improving the standard of record-keeping across the Scottish public sector. Those invited have submitted robust plans which reflect and promote good practice. Experience suggests that authorities have accepted and embraced the benefits of the legislation and are taking it seriously. There is also firm evidence of a willingness and enthusiasm to collaborate, both with the Keeper and across different sectors, to share experience, knowledge, and extend best practice.