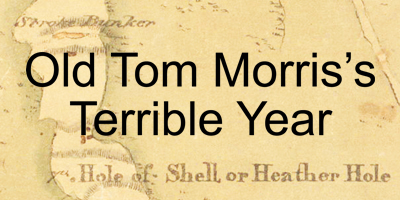 The sad and fascinating tale of Scotland’s legendary golfing champions, Old Tom Morris and his son Young Tom, is revealed in a special display by the National Records of Scotland.

Inspired by the Ryder Cup teeing off in Scotland this year, archivists at NRS have pieced together the personal story of this Victorian golfing dynasty in St Andrews, starting in the year 1875, which brought them both professional success and personal loss.

The display complements the release of Valuation Rolls for the year 1875 on ScotlandsPeople, where Old and Young Tom Morris are just two of the hundreds of thousands of Victorian Scots who can be found. Drawing on these rolls, as well as on our records of births, deaths, marriages and wills, the the display tells the tale of Old Tom Morris and his family, ending with a revealing glimpse of his customers when he died in 1908.

The latest addition to ScotlandsPeople comprises over 900,000 index entries and almost 72,000 digital images taken from 141 volumes of Valuation Rolls.

Tim Ellis, Registrar General and Keeper of the Records of Scotland, said:
“The Morrises helped Scotland’s golfing reputation to grow across the world, and we are using the outstanding historical resources of the National Records of Scotland to mark the Ryder Cup with a tribute to two remarkable Scottish sportsmen.

The release of the Valuation Rolls for 1875 enables people worldwide to take a virtual peek into addresses throughout Scotland between 1841 and 1920 on the ScotlandsPeople website. This is part of the commitment of the National Records of Scotland to provide access to the key records that researchers want.”